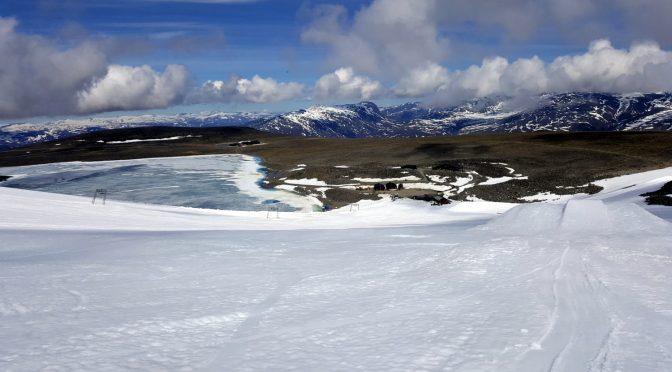 One of the kickers in the park. Photo: Benjamin Moeyersons

When it is starting to get closer to summer, but you still want to ski/snowboard: Galdhøpiggen has the solution!

With it’s 2469 m Galdhøpiggen is the highest mountain in Norway (and Scandinavia for that matter). Located in the Jotunheimen nasjonalpark and close to the touristic village of Lom it is located approximately 5 hours by car from Molde.

Only 5 km away from the top you can find Galdhøpiggen sommerskisenter. This ski resort is one of its kind being 20km away from the nearest village and in the middle of a mountain range with nothing but nature surrounding it. Based on top of the Juvbreen glacier it stores about 5 m of snow – at the moment – on top of the glacier. Since there is almost no precipitation during summer, this 5 m of snow is the base for how long the summer ski resort will be open throughout the season.

There is one T-bar lift taking you from 1850 m (the lowest point) up until 2200m above sea level with a capacity of 1200 people per hour. Even though there are only two slopes to go back down again, one on each side of the lift, it still has the capacity to fit at least 12 race tracks and 500 athletes at the same time, which was the case last week. So this 1400 m long slope which is approximately a 1000 m wide can hold numerous summer ski lovers at the same time. Alongside the skiers-right slope you can find the park. Open from the 20th of may until the 16th of July there are several kickers and rails for the jibbers and park rats amongst us.

At the bottom of the slopes you can find the restaurant, ski-rental, and a bit further – Juvasshytta. Very friendly people will help you wherever they can at each of these places. The restaurant has a variety of dishes you can eat, but a definite must are the Juvassbollen, their famous delicious buns. The ski rental has high profile people working in it, like Even Sigstad, one of Norway’s biggest names in the freestyle ski scene. Juvasshytta provides accommodation as well as activities for their customers on a daily basis.

The slopes are open every day from 10-16h (unless specified otherwise). However, the good thing about summer is that the days are so much longer than in winter. Therefore, the day doesn’t stop when the slopes are closed. After 4pm you can still go for a walk alongside the area, or for the braver ones run up and down the mountain road up until Juvashytta.

RELATED: Time to let the trolls out!

Another option is to do the tour up to Galdhøpiggen itself. Since you’re only 5 km away from the highest peak of Scandinavia, you might as well try to reach it!

From the 1st of June, Juvasshytta organizes daily tours to the top of Galdhøpiggen. This both on foot as on skis, giving everyone the opportunity to go and explore.

We must say that the tour is definitely not one you should do by yourself. No matter if you’re on skis or on foot, you are all walking over a glacier and glaciers must be handled with caution. Keeping that in mind, it is always good to ask some locals to join all the way up to the top or to join a guided tour. There are two times you have to take off your skis/snowboard and walk further up making it somewhat more challenging, but once you’ve reached the top everything is worth it! The highest point gives you a panoramic view all over the Jotunheimen nasjonalpark with mountain peaks and snow as far as your eyes can reach.

A fun fact: On top of Galdhøpiggen there is a little hut, and during the summer there is a guy living there all season. So if the incredible panoramic view is not an incentive enough to go to the top, his special coffee and waffles definitely must be!