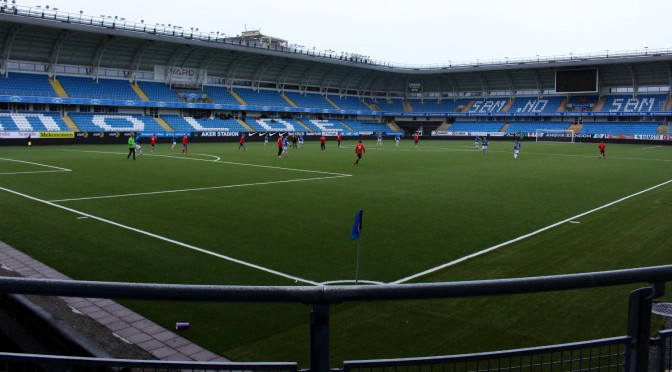 Remember the students on SK Rival who fought to earn their football team a promotion to the 5th division? They’re up to some new shenanigans.

It turns out that the captain of last year’s Rival team, Christian Børve, left Rival to become the coach of the Molde 3 team. Not only did he leave, but he took basically the whole team of students with him to his new home; in total, 16 students are on the squad. Yesterday was the day that Molde 3 came up against their old team.

The early stages of the game were goal-less but Molde 3 seemed to be more of a threat to score due to their possession. The feeling came to fruition after twenty minutes, when striker Jim Robin Henriksen received a long ball directly in front of goal and easily flicked it in. Spectator Patrick Ferreira immediately commented:

«He’s going to score more goals. I know it.»

Boy, was he right. It was only a matter of minutes until Henriksen booted a ground roller in from outside the box. Before Rival could even regroup, Henriksen smashed a header in from a well-placed cross. With three goals all in the same half and no other goals between them, Henriksen had accomplished a legitimate hat trick.

He wasn’t done, though. A cross came too low for Henriksen to attempt another header. Instead, he took a tap with his chest then finished it off with a sideways karate kick. By this point, the floodgates were open. Midfielder Aksel Bauge scored on a breakaway. Winger Adrian Johansen managed a tap in from close range. Henriksen got back to scoring after a beautiful assist from Morten Vestneshagen.

Down 7/0, Rival had no life left in their eyes, but Molde 3 had plenty of motivation remaining. Henriksen was basically toying with his opponents at this point, scoring a sick backheel that left spectators wishing this game had instant replays available. No mercy rule was in effect to save Rival from any more humiliation; another goal by Bauge and two more by Henriksen all looked like Molde 3 was going up against cardboard cutouts of football players. The score was 11/0 when the final whistle blew.

When asked about his eight goal performance, Jim Robin Henriksen was grinning ear to ear while he casually mentioned that «I’m actually a goalkeeper. After this game, I never wanna go back.»