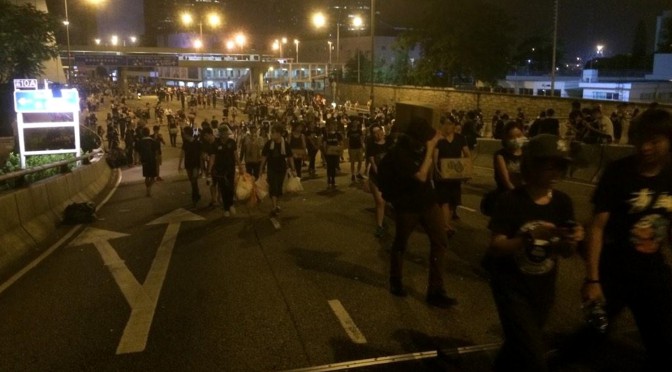 Former Molde University College student Tine Venås (27)  is witnessing that tens of thousands of protesters have come to the streets of Hong Kong under the Occupy Central initiative.

Occupy Central was sparked up by Benny Tai Yiu-ting, associate professor of law at the University of Hong Kong. The main issue seems to be the call of citizens of Hong Kong for democracy. According to Tine Venås of Norway, a former political science student of Molde Univeristy College (MUC) who lives and studies international journalism in Hong Kong, the main protester demand is that public nomination for the 2017 chief executive election is allowed.

“There are a lot of first aid stations where they for example teach demonstrators to use two gas masks instead of one, and to pour water on them for better protection from tear gas. There is a public service where protesters can register by text message if they get arrested. Then free of charge help from volunteering lawyers will be provided,” Tine Venås said Monday night.

Besides professor Benny Tai Yiu-ting there is another important figure standing out in the recent events in Hong Kong. His name is Joshua Wong. Being just 17 years old, he is considered to be the leader of students in recent events by South China Morning Post.

“He is very charismatic and people look up to him a lot,” Tine Venås said.

Monday night the demonstrations calmed down. According to Venås there were no police officers in the streets, which was very surprising after the preceding events with tear gas and pepper spray. Nevertheless the lack of police force turned the protesters into a peaceful crowd. Why the police disappeared, is not clear at the moment.

“I have been asking around. Nobody has been able to give me a solid answer to that, but they are not scared. They say that policemen have to do their duty, but that they are also Hong Kong citizens and some of them probably agree with the protesters,” Tine Venås claimed.