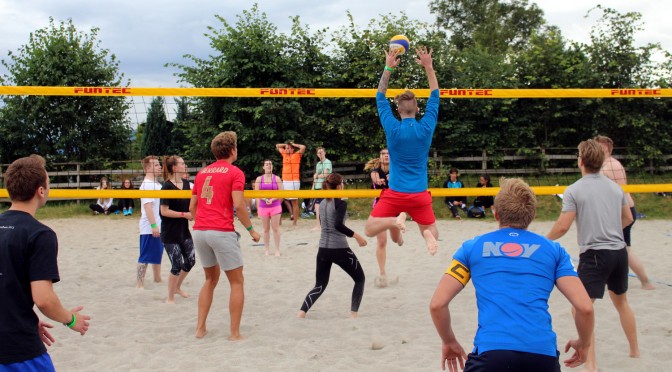 A volleyball tournament is also a part of Åpningsuka. Photo: Matt Lunn

Upon arrival at the volleyball grounds the most noticeable thing was not something seen, but what was missing: there was not a single beer present.

In contrast to last year, which had much more of a pre-party vibe, this was a significant difference. Participants were there for the volleyball.

As the round robin stages were played Thursday afternoon, the all-male group #10 seemed to be the favorite. They easily won their three matches to avoid elimination.

However, when the quarterfinals began, a light rain began as well, and it must have brought the winds of change with it. Group #10 received their first challenge, and it was the underdog group #24 that pulled off the upset.

The new favorites, group #24, managed to ride this wave of momentum all the way to the finals. They sealed the deal with a strong win over group #9.

Svein-Tore Fossum, after hitting the winning spike in the finals, had this to say: «This was a good match but the real finals was probably back in the quarters. I’ve been dreaming about this for years!» he joked, with a smirk.