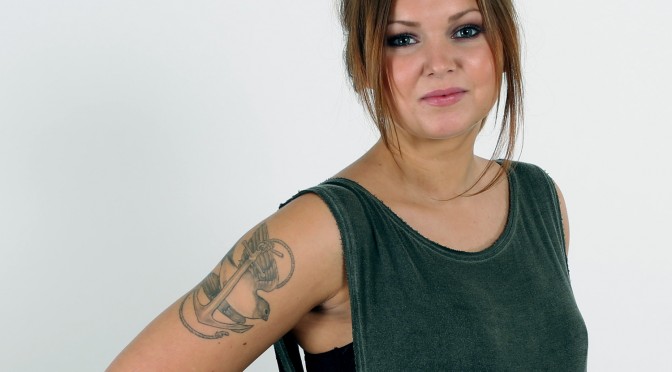 «For both of the tattoos that I have, I was very sure that I could live with them before they were made,» says Vibeke Tessem Sperre. Foto. Arild J. Waagbø

HiMolde-student Vibeke Tessem Sperre was worried about what her father would say, but that didn’t keep her away from the tattoo artist.

WHO? Vibeke Tessem Sperre (23) from Ålesund is interested in music, math and creativity. The clean look and systematic arrangement of goods in local stores which she observed as a child, made her interested in the secrecy behind it all. As a result, she joined Molde University College to study logistics in the bachelors program. She also serves as a volunteer for iStudent.

WHAT? She got her first one – the symbol of her star sign aries – in the back of her neck when she was eighteen. By the age of twenty-two, she tattooed an anchor and a bird on her right shoulder. Both tattoos are black and white, two-dimensional and of low intricacy. The first one is tattooed by a guest artist at Tattoos in Ålesund and the second one by an artist named Michael at Michaels Tattoo in Molde.

«If the tattoo is of a bigger one which requires longer hours, there might be a discount, so in one way it is cheaper to take a bigger piece.»

Being a student, she finds it difficult to pay the price for a third body print. But that does not keep from planning what it should look like.

«I would like to take a sister-tattoo with my sister. My sister made the design – the first letters of our names combined – when I was around 12 of age. At that time, she was away for different reasons, and the design was important to me. She means a lot to me and has helped me grow.’

WHY? She liked her star sign and wanted a tattoo of it, but she was worried of what her father would think of it. Eventually, she found out the best place for the tattoo was the back of the neck where it was easy to hide it.

«When you get the first one, you want more.»

She says the hope of staying grounded, refusing to sink and not giving up influenced her choice of an anchor motive, which she says finally made her feel beautiful.

«Tattoos are creative and beautiful. I feel like it is a part of my artistic side. The bird is a symbol for music and the anchor is the logistics. It is a great balance! My father was ok with the first tattoo and got used to it. My sister has more of them, and it is getting more common in my generation to have tattoos.

Her father is very into boat life, so he actually liked her second tattoo. He actually asked her «Is that for me?», she says.

She have never regretted getting tattoos. Even though some might consider tattooed people as deviant, she disagrees.

«People with tattoo are like everybody else. They simply are getting tattoos to express their love of art to themselves. People like my tattoos and no one has ever said anything bad about them. After all, this is my choice.»