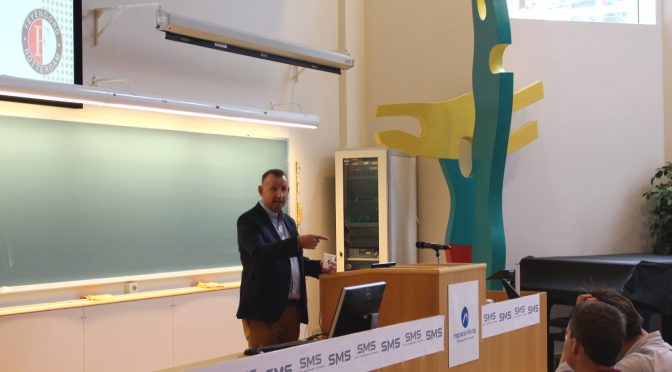 According to Feyenoord Academy’s main principle, Rob Kurvers guided about 90 highly interested listeners at HiMolde through the structure and educational system at one of Europe’s best football academies.

«In earlier times, every coach trained different, there was no consistent philosophy between the age groups.  And that has completely changed in the last 20 years», Rob Kurvers, who went through Feyenoord’s U10 to U19 teams himself, reflected.

From 2009/2010 to 2013/2014, Royal Netherlands Football Association (KNVB) awarded Feyenoord Academy as the best youth academy in the Netherlands for five years running. Additionally, Feyenoord was at the very top of the Development Ranking for the 2014 World Cup in Brazil; no other academy produced more players for this tournament.

Around 250 players from U8 to U19 currently attend the Feyenoord Academy. Every one of them has the same goal: playing for Feyenoord’s first team one day. To make that dream come true, the players have to stick to a strict schedule. Intense training sessions on the field alternate with other football-related education like video analysis and medical issues, general teaching units in school and social activities.

However, there is one point that is also very vital for the everyday life in the Feyenoord Academy: «Have fun. If you don’t have fun, you won’t stand that through. You have to come with a smile and go with a smile», stresses Kurvers.

But still, «the Feyenoord way» is to be continued.

«We are still adding to the program to become a really complete program. In the future, players should be at least two full days per week with us», Rob Kurvers looks ahead into a hopefully successful future.

For the students from Sport Management seminars, the lecture of Rob Kurvers was the summit after having spent about five months of planning.

«We established the first contact in May. We are really proud that we got someone of the quality of Rob», the leader of SMS, Ørjan Dimmestøl, states.

That he and his colleagues chose “The Feyenoord way” as their first event was due to the reason that many students dwell on the issue of talent development.

«Today’s event was a great success, but hopefully it was just the first of many.”

Therefore, they are already working on the next arrangement: In October, they plan to organize a meet-up to connect students with local sports club and organizations.