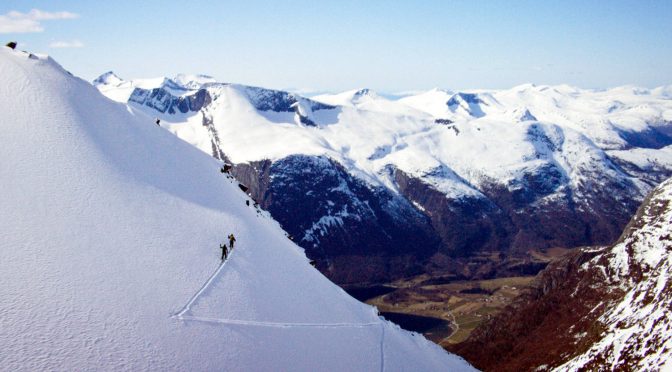 Hiking up Fløtatind, on the border between Nesset and Sunndal municipalities. Photo: Field Productions

Supervention II: the biggest Norwegian ski-and snowboard movie produced to date. And guess what, one of the protagonists is a local. Panorama had a chat with him.

Having been in shown in kinos (cinema) now for little over a month, Supervention II is most probably the biggest ski and snowboard movie ever made in Norway. With a crew of nothing but the best Norwegian skiers and snowboarders like Aksel Lund Svindal, Marcus Kleveland, and numerous others, one of them is a local.

Asbjørn Eggebø Næss, a 37 year old father of two little daughters, has been living in Hjelset just outside of Molde town for the last three years with his family.

For the last ten years, give or take, he has been a professional skier. For those of you thinking that professional skiers do nothing but just getting up in the morning, putting their ski clothes on and go out to ski, are proven wrong in this case.

With a general motto of «I don’t have time to waste my time», Asbjørn works on a daily basis in and around the ski industry. Being a part-owner of SGN Skis, working closely together with teams, selling skis, making new products, and trying to go out filming as much as possible to promote his sponsors, we can say that he is a fairly busy man.

«If you want to be a professional skier, you got to make things happen. If I can do it, a lot of others can do it as well!»

Nonetheless he found the time to provide us with some more insight into the bomber of a movie called Supervention II.

Both the first part of Supervention and Supervention II are produced by Field Productions. Being their ninth and respectively tenth ski- and snowboard production, it had to be something big. Filip Christensen, the editor, wanted to make something for the big screens. Raised with the idea of trying to motivate people (again) to go skiing and snowboarding, Supervention ended up with approximately 36000 visitors in the cinemas, astonishing many spectators as well as managers.

Supervention II is an independent sequel to Supervention, even though it doesn’t have anything to do with the first movie. A two hour long movie stuffed with alpine skiing, freeskiing, snowboarding, on the most beautiful locations in Norway and around the world, it has already the same amount of spectators and counting up until today compared to it’s predecessor.

Did the whole crew know each other, because all of the footage is from places around the world?

«Everything was filmed separately, but I know most of the guys. Especially through the premiere we got to know everybody better. Several of them travel around the globe and compete in various competitions. I’m more on my hideout in Norway.»

What is the nicest place you’ve been to with Supervention?

«I really enjoy skiing local mountains, that was my choice. It was the most convenient wat to combine filming with the crew and being there for my family. Another reason for staying mostly in Norway is that our region is not so much screened is ski movies. The goal was to let people see our region from another perspective, try to spread out the joy of skiing and snowboarding again, and to take down boundaries so people get more motivated to ski local mountains and be proud of what they are doing.»

Compared to the first movie, where you got caught in an avalanche, the second was without any incidents. But what does an avalanche like that do to you?

«First of all, you never want to end up in an avalanche! The more time you spend in the mountains the more experience and knowledge you get. It also means that the chances of something to occur get bigger. This is because you’re exposing yourself to more differing situations. Sometimes it is hard to read the signs whether or not you can go, the only way to get that experience or necessary knowledge is to get pretty close to the line of safety, but that line is pretty hard to define. Being out filming in Alaska with the helicopter, a certain amount of stress involved, time just slips by you without even noticing, and that specific day the spot had been facing the sun for a bit too long. Once you get the go, you have to commit to your line. You are aware of exposing yourself to risks, but try to avoid them as much as you can. When I was in that avalanche, I couldn’t tell what was up or down or where I was. It was very important for me to go skiing afterwards. I didn’t have any concerns because if you can pinpoint what went wrong and make sure not to do that again, you’re good to go.»

By showing and talking about the avalanche the producers are hoping to, once again, inform people that it is very human to make mistakes and that skiing can be dangerous sometimes. With the hopes of preventing people from making bad calls when they’re on top of the mountain and have a bad feeling, they want to make sure that people trust their gut.

«Skiing a lot gives you a good perspective and knowledge. What happens then is that you can choose to use that knowledge and experience or not. When you don’t have a good feeling about it, don’t do it.»

Speaking from experience, Asbjørn stresses that it is important to learn from mistakes and prevent yourself from getting into dangerous situations since the stakes are so high. It is not mountains that release avalanches, it is people.

With this in the back of our minds, we were curious what future projects Asbjørn has planned.

«Supervention has come full circle, but I already have some future projects of my own.»

With projects like skiing in Lofoten with his clothing sponsor Norrøna, creating skitour webseries in local mountains and going to ISPO (the international main exhibition for sport business) with his ski brand, he has got plenty of things to do in the future.

«Supervention would never have been the same if we held back 5%. Everybody has been doing the most they can with the conditions at hand.»

Therefore it is very important to keep in mind that you cannot change the conditions, only your mindset.

Supervention II is still running in  Oslo until the 15th of December, so if you haven’t been able to watch it yet, make sure to definitely go and enjoy Norwegian wintersports on the big screen!

Otherwise you can also buy the dvd or blue-ray online on Field Production’s homepage.

2 thoughts on “Skiing down spines of the worlds hardest terrain”