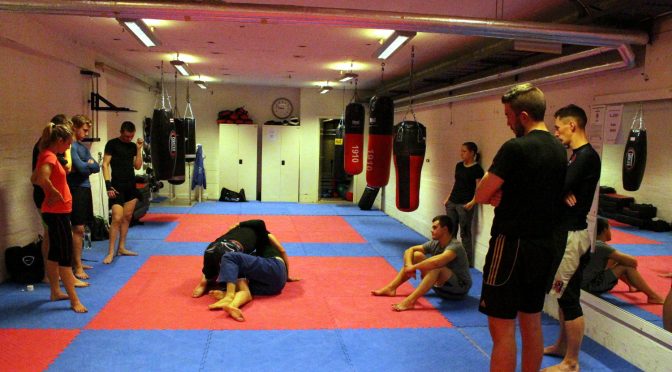 Eduardo giving an example of how to do a new ground position. Photo: Benjamin Moeyersons

At Molde Boxing club it is not only about keeping you on the feet and punching hard. Two times a week, it offers Brazilian Jiu-Jitsu, a smooth version of combat sports. Panorama got an exclusive insight from a real Brazilian.

A challenging voice sounds through the gym at Molde Boxing Club (Moldekameratene Bokseklubb)  and nine brave amateur athletes do their push-ups even even faster.

It is the voice of Eduardo Perdigão Drapier, new Jiu-Jitsu instructor at the club, motivating his team during the warm-up activities. The air in the gym is fuggy and the air condition roars above our heads. Nothing that keeps the participants from pushing even harder, now doing a series of sit-up exercises.

Unlike in other combat sports, such as Judo, Jiu-Jitsu mostly only starts with taking your opponent to the ground. Kicking, hitting or biting is not allowed. But once on the ground, the fighters can use certain maneuvers or counter-maneuvers to finally apply a submission hold on the opponent. In this class, Eduardo shows a triangle choke where he encircles the neck and one arm of the opponent with his legs. The participants attentively watch and listen to his explanations. Then it’s time to try it themselves.

However, who expects tremendous fights in Jiut-Jitsu, will be disappointed. It is more about tactical, deliberate movements – or to say it with Eduardos words:

Indeed, the ‘fighters’, if one wants to call them like that, actually wrap their arms and legs around each other, reacting to the other’s movements. Not to make it too comfortable on the mats, Eduardo calls for a new round of push-ups and sit-ups after a series of exercises. Finally, a round of training fights is on the schedule. Now it gets serious – recognizable by the teeth protectors the guys now put into their mouths – and the suddenly more powerful movements during the fights. But still, what matters is the technique, not power and physical strength.

That is why Jiu-Jitsu is also for obviously smaller, weaker people. Jenny, an 18-year old high school student and the only female among the strong guys, proofs this. With apparent ease and control she frees herself from the hold of her opponent.

He himself wears the brown belt, what is the second highest level of skills and allows him to work as instructor. Back home in Brazil, he mainly taught children. This summer, he moved to Molde to do the master program in Sport Management at HiMolde.

“In Molde, I just wanted to practice, but then the people from the MMA club asked me, if I want to give courses. For me it is a good chance to integrate myself in Norway.”

Assessing the level of his new Jiu-Jitsu mates, Eduardo sees big potential: “They are mostly beginners, but very talented.“

There is only one thing he misses here in Molde: the Kimono. Then cuddling and hugging would be even more professional.

The training scheduele is Mondays 7-9 pm, and Thursdays 8-10 pm.