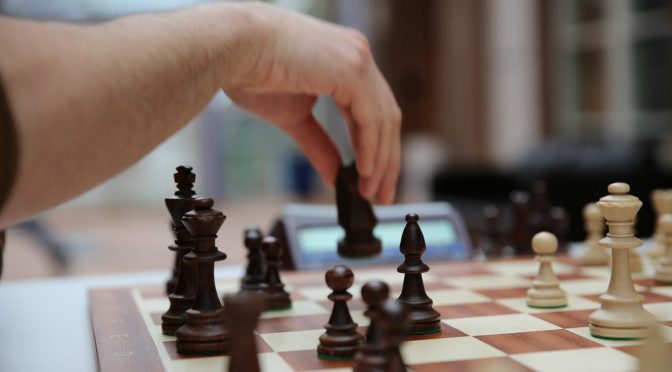 Player moving knight on the chess board. Photo: Javid Baghirov

You may have heard of the saying that chess is a game without boundaries; this is very true! It can be played and enjoyed by both young and old, regardless of sex, race, class, religion and physical disability.

On Friday 23rd of April, in 90-meterskogen at Molde University College, a chess tournament took a place with the participation of 8 chess players, all of them men. Having attracted the interest of a group of participants and viewers, the tournament lasted for about 2 hours.

Organizers of the tournament, Håkon Bentsen and Tor Wetle Hoem, are the members of Molde Chess Club, and both have the ranking of more than 2000 elo, which is considered as ”Expert” level in chess. They brought professional chess equipment from the chess club and helped with counting system and match refereeing.

Tor Wetle Hoem answered our questions about the event:
– Can you explain the purpose of such tournaments?
– Our aim is to create greater awareness about the game of chess and get more people playing it more frequently,.
– When and where can students attend the chess in Molde?
– The Chess Club is open every Thursday from 18.00. From 18.00 to 1.900 the children are in action. From 19.30 the grownup children arrive (smiling). We have a varied tournament set up within all formats, blitz, rapid and standard. We try to have some lessons from 1930-2000, but mainly you learn from tournament play. The address is Parkvegen 35. Welcome to everyone!
– What is a level of participants? And what is your overall thoughts about tournament?

– It is nice to see that the students play at an ok level, fun to watch, and it looks like they are having fun. But still, they need to learn some basics principles to avoid unnecessary losses. I believe that if you study some chess it could benefit your studies. It is about synergy, chess develops the brain in many different areas.

The 7-round championship was played at time control with, and the each player had five minutes of playing time in every game. All the games were very tense and emotional. But the favorite of all games was Kristian Gjerde from Bergen, who study for a Master’s degree in Logistics.

The winner of tournament, Kristian Gjerde, answered the questions after games:

– First of all, congratulations on winning. How did you become interested in chess?

– Thank you very much. When I was 18, Magnus Carlsen played his first world championship on Norwegian TV. Like many other young Norwegians who became followers of chess, I also got interested and registered on chess.com.

– Did you like the tournament? And was it easy wins for you?

– It was fun to play, and I felt that I had pretty good control in all the games.

– What are your overall thoughts about the tournament?

It is good to have it since it will provoke more interest among students. And I would like it to be more tournaments in the future. Hopefully, more people will join then.