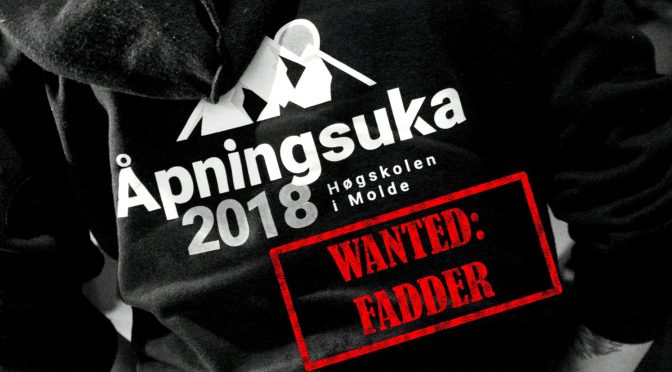 Åpningsuka is coming closer and closer, and the program for 2018 is almost entirely fixed. However, the most important contributors are still missing to some extent, namely the buddies (“fadder”) for the new students.

Even if it is still more than three months to go until this year’s Åpningsuka, it’s getting really serious now for the organizing team around leader Victoria Ness.

Last week, they finally announced who is going to perform at the beginning of next semester, and it will be no less a figure than the Norwegian chart-stormer Julie Bergan who will stage the opening show at Molde’s town square on 15th august.

Read more about the entertainment program and the artists here: http://panorama.himolde.no/2018/04/27/apningsuka-er-musikkfest-julie-bergan-pa-radhusplassen/

Other than in previous years, the focus will be more on activities and socializing rather than two weeks of only drinking.

“Parties and drinking are of course still important for the opening week, but it should not be the only thing. We plan to have a good balance of partying and other activities. So ideally the students socialize on a party on the one day and get to know each other, because they tend to be more open when they drink; and then they ideally also talk to each other again on the next day without drinking”, Espen B. Solvang explains.

The shutdown of Kompagniet posed an unforeseen challenge to the organizing committee.

“First, we wanted to host everything there, just as the years before. But then Kompagniet closed, and we had to find another location. But also this problem could be solved. Now we got Molde’s ‘Gamle Kulturhuset’ as event location, which is actually much better in many ways; it is closer to the university and the stage is more spacious”, Espen says.

Where they still have to work on is the organization of the buddy groups (“fadder”).

“So far, 18 groups of four buddies each registered for the opening week. We aim for around 100 buddies in total finally, so it would be great to find between 20 and 30 students who are willing to participate as buddy for the new students”, says Oda Glærum, who is responsible for the buddies.

Especially international students are highly requested to engage as fadder, because apart from one international group it is only Norwegian students who has registered.

To make it more attractive to engage as buddy, the organizing committee hosted an official “fadder kick-off” party last Friday night for those who already registered. The local DJ Soonix catered for the adequate music and the right atmosphere in Smuget. And of course, the future buddies already started ‘practicing’ for the opening week.

For the more serious preparation of the buddies regarding their role during the two weeks in August, the organizers will hold a workshop for them just before the kick-off of the opening week.

The classification of the ‘buddy children’ will be done according to the study programs and the nationality.

“We do not want to have a pure group of exchange students because the internationals connect through ESN anyway. So we will try to find a good solution were everyone feels integrated, the very young Norwegians who then just graduated from high school as well as the students who come from far away”, Espen highlights their considerations hereby.

“We also do not want to have only one nursing student in a group of logistic students; we try to have at least three students of one program in a group, then the students feel more comfortable”, Oda adds.

In return for their commitment, the buddies will be invited to another party in August, and they will receive an official ‘fadder’ certificate which approves their social commitment.

Students who are interested in becoming a buddy can still register here: https://easyfact.no/reply/qiimwmyzxr

So far, the organization of the upcoming Åpningsuka 2018 is up and running – and: “We still have some secrets regarding the program, so the students should stay excited!”