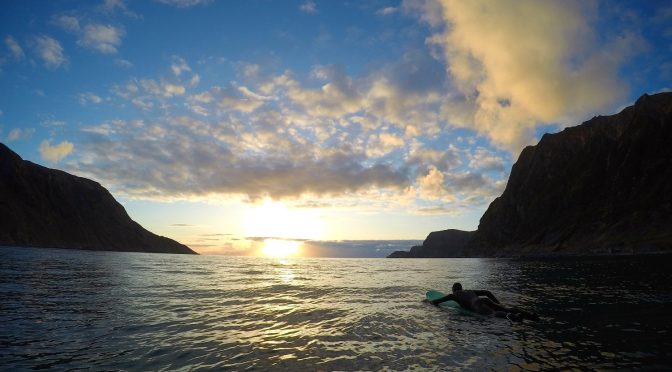 Alessandro Locatelli paddling out during sunset to catch some waves. Photo: Benjamin Moeyersons

STAD (Panorama): The last weekend in April, iFri organizeded a trip to the surf camp at Hoddevik beach on Stadlandet in Selje. How did HiMolde students survive surfing in ice-cold water?

Even though there is still plenty of snow covering the mountains all around, 18 of us, brave students of HiMolde, decided it was a perfect time to go surfing. To do the sport, that is associated with summer, beach, palms and bikini.

Well, that picture is almost correct, but the bikinis were hidden under 6 millimetre thick wetsuits and there are no palms in Norway. Apparently, 5 Celsius degrees ‘warm’ water and about the same air temperature are perfect conditions for surfing in Norway.

After a five hours drive from Molde, we found ourselves at the Lapoint Surf Camp at Hoddevik, a picturesque white sand beach hidden in a valley with just couple of houses, isolated from civilization. Even before the cars were unpacked, some of us were already skating to the beach to check out the waves.

Early in the morning the following day, we received our equipment – a thick wetsuit with a hood, neoprene gloves and shoes, and – of course – boards. After a brief lesson on how to hold the board so it doesn’t punch us in the face when we fall off, we were all set to catch some waves.

MORE PHOTOS: Check out the Facebook-album.

It is easier said than done. It took us a couple of hours of patience and practice before some of us managed to stand up for the first time. Surprisingly, it wasn’t the cold water, but exhaustion, which forced us to get out of the water eventually.

However, what we didn’t know yet, was that the worst part was about to come.

“This was the worst thing about the entire surfing, getting in and out of the wet, cold, and sandy wetsuits, it’s really not easy,” laughed one of the Norwegian students, Jan Sindre Heltne.

“Luckily, when we returned to the house, the sauna was warmed up for us. It was very cozy, especially when we turned on some music,” said Heltne.

Our instructors claimed there is nothing like a beer after surfing, but those who still didn’t have enough by the end of the day, headed off to the beach again for sunset surfing. In the evening, both Norwegian and international students gathered to share the excitement and drink some beers.

“We soon found out that we should ban speaking Norwegian, it was a insanely good idea, only then everyone was included. The atmosphere was great and we had a lot of fun,” said Heltne.

During the weekend, there were two more lessons and free surfing for those who still had some energy left. After those hours of persistent efforts consisting of fighting through the waves, climbing up to board and popping up at the right moment, most of us managed to catch at least a few waves. The more talented ones even tried some tricks, such as riding backwards. Even though the surfing season at Hoddevik is now – before summer – nearly over, hopefully we will be back in the autumn to keep developing our surfing skills.

A huge thanks belongs to iFri for making this event happen, and to Lapoint Surf Camp for their great hospitality and patience with us!