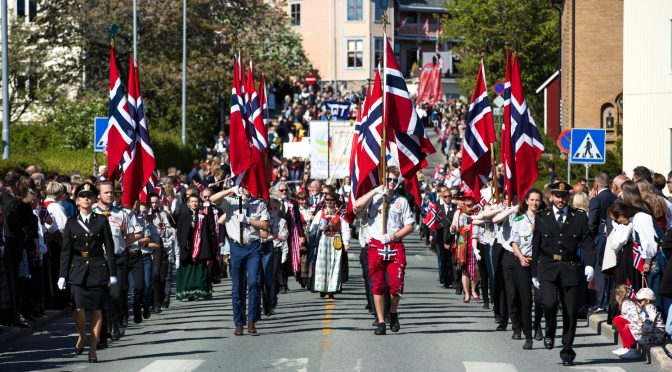 If there is one thing to be found more than bunads on National day, it’s Norwegian flags. Photo: Benjamin Moeyersons

They come in hundreds on the 17th of May, and yet each one is unique: the Norwegian bunad. Reason enough for Panorama to take a closer look at this phenomenon and go on a vunad hunt through Molde.

In Norway, no year respectively no National day passes without raising the question which bunad is the most beautiful one. Especially the media apparently loves to come up with rankings about the more than 400 different versions of the Norwegian national costume. In recent polls, the blue-colored Nordlandsbunaden – most common in the regions of Nordland, Troms and Finnmark  and consequently rarely represented around Molde – took the lead in those rankings.

Still, considering that incredible and multitudinous number of bunads that are paraded on the 17th of May, we finally agreed that it is sheer impossible to decide about which one is the most beautiful. And of course, each wearer is convinced that his/her bunad is the most beautiful one since everyone connects a certain story or even history with it. What day is better qualified for that than the Norwegian National day when each and every Norwegian (or at least almost) wears his or her own traditional costume.

We started our ‘hunt’ already in the morning when Molde’s kindergarden and school kids performed their parade through the town. Final result of this initial observation: a whooping of 17 different bunad versions. The most prominent one is obviously the local Bolsøybunad. It consists of a blue skirt and a top part in the same color with flowery embroidery ornamented with silver brooches. Also the Malobunad consisting of a red top and a blue skirt is seen very often. This one, the similar Nordmørsbunad, the Bolsøybunad and the black bunad from Sunnmøre represent the Møre and Romsdal region.

Later in the day we meet Kristin who wears the latter one and explains: “What I like most about my bunad is actually the color. You could also have it in blue, but I like black more.”

Whilst Kristin even wears her cape on this day to protect herself from the wind, men wearing the male version of Sunnmørsbunad sweat even in these conditions.

“I was really happy when I heard that it would only be 11°C today, but even that is way too hot for this dress!”, says Henrik in his Sunnmørsbunad when he arrives at HiMolde to celebrate the day together with his fellow students.

Here, the number of different Bunads multiplies since the students come from all over the country; like Ingvild who comes from Fanahammeren in Hordaland and wears the Fanabunad which has a black skirt with a white apron and a red-blue top decorated with tiny pearls. “I really like all the details and the colors.”

Although each bunad is supposed to represent a certain region of Norway, there are also nationwide costumes which are similar to the bunad but not the same.

“I wear a so called ‘festdrakt’, it does not belong to a certain region”, Astrid explains. “My grandma had such one; therefore I also wanted to have it. I actually wear it several times a year, not only on 17th May but also for confirmations, baptism and things like that.”

Considering all the beer that is drunk and all the cake and hot dogs that are eaten on that day, some unexpected and especially unpleasant adversities are likely to damage one or another bunad – what can be a middle catastrophe considering the monetary price and non-material value of the dress. Some insurance companies detected exactly this as additional business and therefore offer a special 24-hour insurance for your bunad that covers any damage that happens on the 17th of May up to a certain amount.

RELATED: Bunad – the ever popular dress for special occasions

“I have such one! I even asked again if that is valid for my bunad because you never know what happens”, Maren wearing her green-turquoise version of the Nordmørsbunad. And she is definitely right, such jewels need to be taken care of what applies to all of the finally 29 versions we spotted on that day.

Unfortunately it was not possible to answer the most interesting question, namely what one wears underneath the Bunad. But that is probably a topic to be discussed at a later hour on that day …