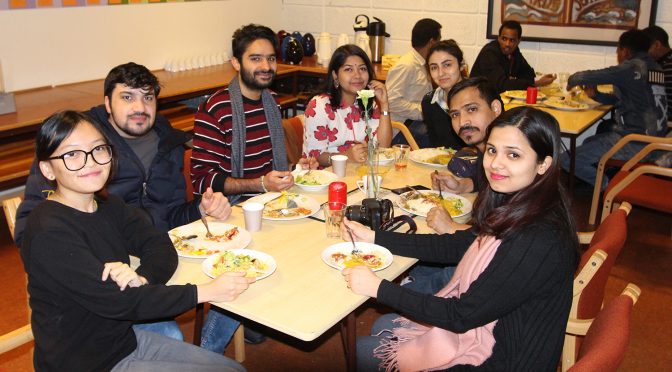 If there’s a place in Molde where someone has the opportunity to embrace a unique cultural outlook for a day, the International Café might very well be the singular experience worth discovering.

Organized for ten years by the church organization KIA, Kristent Interkulturelt Arbeid, the event is held several times each month in the basement of Molde Cathedral and brings all kinds of people together, including students who – some of them – had decided last Saturday to offer their contribution and open the culture of their country to others.

Among them, Shahadat Hossen decided to cook some local food from his home-country, Bangladesh, and with the help of two other Nepalese students from Molde university college, Suman Dura and Priyanka Paudyal, they helped prepare a fantastic meal for everyone to share and had a lot of fun doing it, as Shahadat explained : “I love it. Cooking for people like that, making them discover the food from my country. During the Christmas break it was similar, we had a party at my place and we cooked for people so they could taste all the different food. I really love it ». Having taken care of the food preparation since 8 am that day, no one will doubt about Shahadat’s dedication to please people’s taste buds. And after having heard only positive feedbacks concerning the dishes prepared, from the lentil soup to the sweet carrot-based dessert, it is safe to say that people will have a good feeling about Banglasdesh.

For him and some of the international students who regularly show up at the event, the International Café is a nice way of staying in touch with home, as Shahadat described some similarities that make the basement of Molde’s Cathedral a special place to be in :  “It’s really nice for us to have this kind of place because it reminds us of Asia and our own country where it is common to have many people together at the same place, eating together like that. In Molde, there is no other place like this one, even when we are eating at school it’s not like that”.

Qasim Hussain, another student from Pakistan who showed up on Saturday and shared a free meal with his friends from the university, also positively answered with his usual smile when asked if the International Café was a regular meeting point for them : “Yes, we usually come here and eat together when we can. It is really nice to be here and enjoy the food”. He also invited more students to be a part of the event during the next weeks in order to share a pleasant moment together : “If anyone wants to join us at our table, they are welcome to do so”. The invitation could only increase the number of students at the International Café, since several others had already decided to come at lunch time.

On top of the international students who can be seen there, it truly is a beautiful mix of cultures that is offered to all of those who decide to join. Between the young children having fun in the playing zone and the oldest persons sitting and talking around the tables, from the Norwegians to the Afghan and Syrian refugees competing together at a Kahoot! quiz, the International Café is a perfect illustration of what unity represents. Smiles and greetings seemed to be on everyone’s agenda and it is no surprise, therefore, to hear Reidar Andestad, in charge of the event for several years, describe the concept of the latter and what is expected for the following weeks : “The International Cafe has a focus around food from countries with refugees in Molde and it is supposed to be an informal meeting point that aims to bring people together […]. Also, every time we cover a different topic which can be about anything, religion, the police, raising children in Norway… Today, we tried to introduce people to Norwegian folk dances.”

More so, while explaining that it usually requires thirty to forty people for the event to take place, from the initial food preparation to the final cleaning part, Reidar Andestad also highlighted the practical side associated with such an organization, especially for refugees who recently arrived in Norway and could take advantage of this opportunity : “It can also help new refugees who just arrived to have a first experience here. […] If you look at the program, you can see that next time will be focused on Afghanistan and then it will be Syria’s turn and it’s quite funny to see them compete sometimes with each other.”

He was also glad to see that students from the local university were having a good time at the International Café and particularly on this Saturday since some of them got involved in the kitchen : “We are always very happy to have international students and they are always welcome here. Today was a bit special since some of the students wanted to help and it was nice to see Bangladesh being represented for the first time.”

Seeing his dedication for running such an event gives only a glimpse of what Reidar Andestad and KIA are trying to establish in Molde. It seems obvious that they have their eyes on a larger picture and want to contribute as much as they can to enhance the situation of the people who are not as fortunate as those living in a country like Norway : “With KIA, we work to improve the situation of the ones who come here and we want to bring more refugees in Norway. […] Right now, the UN system only allows 3.000 refugees to come to Norway and we would like it to be at least 5.000.”

This could also explain Reidar Andestad’s efforts to establish a foreign policy meeting point in Molde where such issues could be  discussed. The latter having a direct impact on the attendance at the International Café, it appears legitimate to see such a platform being called for. Nevertheless, the International Café has planned to continue its representation of foreign countries through food for many more Saturdays to come, and in the meantime, it will continue to give a unique feeling of home to those attending.