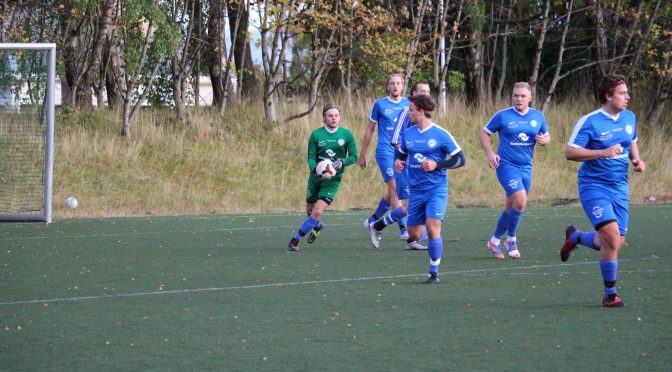 KGB LUBBENES (Panorama): Two years after being founded, the MSI football team now have a chance at being promoted to fifth division after Sunday’s 2-1 win over group leader Elnesvågen 2.

Fifth division in sight for MSI after Sunday's success

Two years after being founded, the MSI football team now have a chance at being promoted to fifth division after Sunday's 2-1 win over group leader Elnesvågen 2.READ MORE: https://panorama.himolde.no/2019/10/08/after-crucial-sunday-success-msi-finally-have-fifth-division-in-sight/

Afer all the hard work, difficulties and problems they faced during two seasons playing in the local and bottom sixth division group 2, Moldestudentenes Idrettslag (MSI) now have their first chance in the teams history to get promoted.

But they still need to get four points or more in the seasons last two matches to get ahead of current group leader Elnesvågen 2: The match against Malmefjorden 2 will be played either Saturday or Sunday – probably at KGB Lubbenes, and the final match against Batnfjord is being played Monday at KGB Årølia.

And if they succeed in that, they will have to play a mini league of two matches against the winners in sixth division group 1 and 2: Dahle 2 from Kristiansund municipality and Isfjorden/Åndalsnes 2 from Rauma municipality. According to consultant Kjetil Henningsen in Nordmøre and Romsdal fotballkrets, the three planned matchdays for teams that compete for promotions are October 19/20th, 23th, and 26/27th. At least one of the three will be promoted, and under some circumstances a maximum of two teams will be promoted from sixth to fifth division.

Sunday, the presence of Georg Eugen Lindberge Johannessen, who was the best player yesterday as an emergency substitute goal keeper, was a real factor for MSIL to win the match. His performance was outstanding.

The more Elnesvågen 2 managed to frustrate MSI during the match, the less the student players seemed to know what to do. You could almost see them looking toward the dugout, baffled as to why the plan wasn’t working, as if there was some sort of glitch in the system.