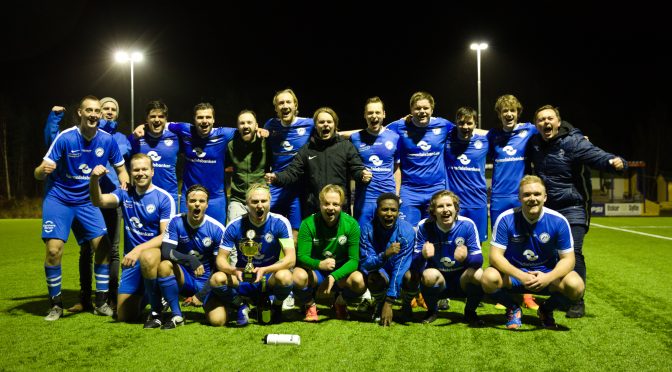 DAHLE KUNSTGRESSPARK (Panorama): A fabulous Wednesday night victory of 2-4 for MSI against Dahle 2 secured promotion to the 5th division for the student football team from Molde.

After last night’s tremendous 2-4 victory in a difficult last match for MSI in the championship playoff between the three group winners in the regional sixth division, the student football club has now been promoted to fifth division, earning the right to get even tougher competition during the upcoming 2020 season.

MSI have been getting off to some great starts this year, but Marcus Johansen’s last night’s opening goal was the first goal that MSI have scored in the first three minutes in this season. It took just 180 seconds for him to score it.

Ten minutes into the match, MSI’s Junior Mutua Kitonyi was face to face with Dahle 2’s goalkeeper Bjørnar Jünge Husby and tried to score, but he was violently stopped by Husby. However, MSI’s Marcus Jørgensen received the ball in front of a now open goal and brought the score to 0-2 before the goalkeeper received a well-deserved yellow card.

A misunderstanding between MSI’s Johannes Myrvoll Nystøyl and Vetle Bråttvik Simensen caused a corner for Dahle 2, which the Kristiansund team effectively used to produce its second goal after 26 minutes of play.

This goal was tough for MSI, who now had to score at least two more goals than Dahle 2 to be promoted. But the student champions from Molde never gave up.

After the match, MSI captain Trym Malones Brakstad, described his team’s history and spirit like this:

“In the beginning it was just a joke for us and we wanted to have fun only, but later we discovered that we are a very good team, and that we have to fight to get promoted.”

MSI‘s willingness and confidence pushed them to score again in the 32th minute, unluckily the referee cancelled it because of offside. When the referee whistled the end of the first half, the score was 2-2.

In the 52th minute of the match, Marcus Jørgensen tried a clever lob towards Dahle 2’s net, but this time referee Eirik Hyldbakk Furu was confused, waiting for his assistant to give him a sign of whether it was a goal or offside. It was like a heart attack for MSI to wait for the referees’ decision. Luckily, the referee decided it as a goal, boosting the MSI players’ confidence.

In the 85th minute, during an MSI attack, Mads Kristiansen scored the fourth and crucial goal for promotion.

“We are very happy that we had the honour of scoring the deciding goal in our most important game of the season.”

2 thoughts on “The conquerors of sixth divison – ready for fifth!”