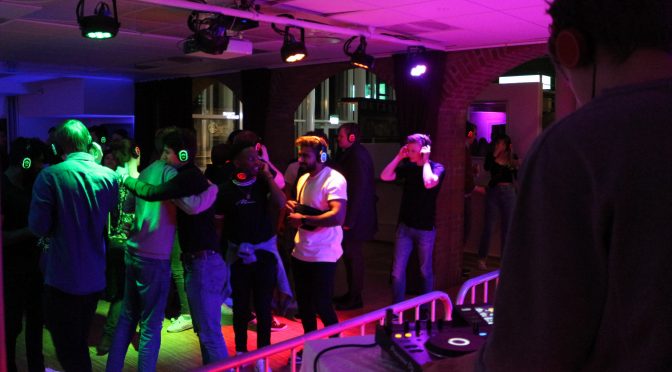 Saturday night, more than 100 students gathered at the first party of the year to celebrate the opening of Vinteruka 2020

This year’s Vinteruka (The Winter Week) will last from 20 to 26 January, offering many events for participants. Before going to the main activity to Strandafjellet, the students will have the opportunity to warm up at some events, as was the case with Silent Disco.

It might be difficult to imagine how people can dance in dead silence with the music in the headphones. Does everyone have the same music? You can imagine how awkward it looks from the side when all people move to different rhythms. That’s exactly what I thought while walking to Smuget student bar, where this unusual disco was held.

However, reality was much better than expected. As soon as headphones fall on ears, you become a part of those who hear the sound. There were two DJs who played different types of music and you can always switch between them. You can look at the people around and mentally understand what music is playing in their ears. Meeting glances with dancing people who have the same color illumination on the headphones, you exchange smiles – as if you know something that other people don’t.

“We have two DJs competing with each other, they try to get more people on their team and they work really hard to try to find music that relates to the most students,” explained Daniel Orrem, a student of University of Bergen, who was been invited to the party by his friends from HiMolde.

“It’s really cool. It’s not my first experience in it because I went to Silent Disco during Åpningsuka and it was pretty great. You have these headphones and when you take them off, you don’t hear any music. For me, it’s not a huge difference between concepts of the regular party and Silent Disco,” said Emma Tilman Haugland, a first-year bachelor’s student in law and administration (juss og administrasjon).

“It’s really fun because you can always change the music on headphones. I think we should have more events like this,” added student Kaja Engan.

“It’s going well and rocky, we have different kinds of music and we love all of them. We’re enjoying so far. This is my first Silent Disco party ever,” said Pratigya Bhattarai, a first-year master’s student in logistics from Nepal.

Organizers had to cancel several activities due to lack of snow in Molde. However, Vinteruka 2020 looks promising because Silent Disco was a great success!