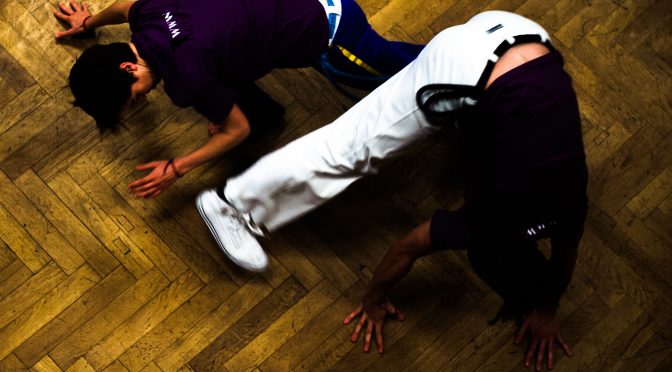 Tuesday, you can learn to play capoeira (brasiliansk kampdans) on Molde campus. In the photo capeiristas from Grupo União na Capoeira Norge (GUC) is playing at a Batizado event in Bergen. Photo: Private

Tobias Avlund Heiberg (42), a first-year nursing student and organizer of capoeira classes on Molde campus, shares his opinion on the magic art of capoeira.

Only a few know what capoeira really means. For an uninitiated person, this word can most often be associated with something exotic, but not with martial art. However, capoeira is a burning Brazilian mix of martial arts, dance, acrobatics and songs. Tobias Avlund Heiberg is perhaps the only capoeira coach in Molde. Once he decided to devote his life to this kind of martial arts, having spent many years studying it. Recently he decided to open the course of capoeira on campus.

Tobias, could you tell what capoeira is?

What does capoeira mean for you?

For me, capoeira is playful and fun training. When I play capoeira, I get the feeling of the flow and lose myself a little bit.

How did you begin to play capoeira?

I saw commercials and became interested in it. Then I joined classes during my studies at a university in London. It happened approximately 20 years ago. I started to play there, then I moved back home and found some classes in Oslo, where I lived, and continued to practice.

What are the benefits of practising capoeira?

Capoeira is really good for someone who wants to train different muscles across the body since it includes a lot of soft acrobatics and movements with spinning around. Also, it doesn’t require much time to learn caopeira, because anyone can learn basic 5 movements in 1.5 hours and you can start playing. But then it´s starting to be difficult to find a balance between playing together and playing against. It’s hard to define a rule because I can block your movement and score a point, but if I do it all the time, it will always break your flow, your movements. Sometimes it just works, sometimes it doesn’t. It’s all about chemistry, not necessarily about how good you are. It’s all about excepting the pace of each other and allowing earning points.

How did you come up with the idea of organizing capoeira courses on campus?

I miss playing capoeira, that is only the reason. I try to arrange classes as easily as possible: there is no fee, no signing up. I had some experience of organizing capoeira in Kulturskolen in Molde, then I decided to organize it here on campus of HiMolde.

How many students attend capoeira the course on average?

We had only one class so far and it was only me there! (laughs) No one came, but hopefully, someone comes to the next meeting.

It is gratis to attend the dance classes.