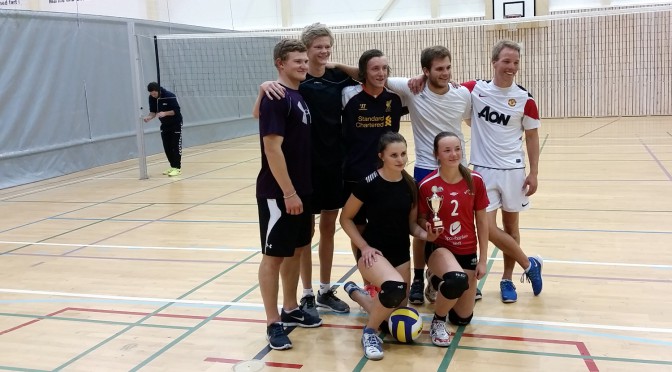 As the clock was nearing 19.00 teams started to gather at Træffhuset in Molde. Some with big confidence, some with less – some with a lot of experience, some with very little – but everyone with a lust to enjoy some volleyball.

“We do not have an expectation to do very well, but we hope to have great fun,” said Cato Søndena Karbøl, member of team Smash in the foyer of the sport venue and thus he summed up the main purpose of Idrettsdager 2014 organized by MSI, the student sporting organization of Himolde.

“MSI is an Organization for students by students,” said Henriette Goksøyr, the leader of the organization.

Idrettsdager was a volleyball and football tournament which took place on 12. and 13. of September. The tournament was not on professional level at all. Teams consisted mainly of students of Himolde and some students of Molde Folkehøgskole. Friday, which was dedicated to volleyball, was not in any way exhibit of precise athletic performance, but it was a brilliant parade of relaxed fun, student spirit and healthy competition.

The volleyball tournament started with twelve teams divided into two groups. But two of them especially caught a spectating eye: Team Vodka/Tequila and team Jägermeister. Their attire, attitude and unconcealed rivalry were all attracting attention ever since they entered the sport venue.  Matt Baker, an international student from USA and part of the team Vodka/Tequila described the situation:

That is marvellous illustration of student spirit and sportsmanship.

“We are here only to beat team Jäger!” he added and eventually they managed to live up to his statement. Further investigation of the purpose of alcohol usage in sport event such as this one brought a surprising outcome.

“You are getting better and better at certain activity when you are drinking until a certain point when you are best at it and then the ability starts dropping.  A scientist named Ballmer named this sweet spot a Ballmer peak. I think that our team reached the peak in the third game we played,” explained Matt Baker.

Further research concluded that Mr. Ballmer was actually a business executive at Microsoft and his peak referrers to programing. But it has been used in context with many other activities in the world press.

Sadly and surprisingly enough neither team Vodka/Tequila nor team Jäger made it to the final match which was played between team Raymond and team Flight & Fight. Naturally this match brought the most significant tension and highest level of competition of them all. Also spectators could enjoy very elaborate volleyball due to the fact that some professional volleyball players were present on the court. After this tense volleyball battle team Raymond ended up with a trophy in their hands.

“I feel very good about this tournament, we won every single game. The mood through the whole event was amazing with a great energy. And even though it was the first time our team played together, we performed very well,” concluded Aslak Rockwell Djupedal, member of the winning team Raymond.

First Price as good as quarters

Much was expected from them however, Bergen’s team Bugge e Tjokk emerged as season’s winners with a 3-2 win over Farlig Tversover at the just concluded Moldestudentenes Idrettslag (MSI) Sports dayheld on the13. of September 2014 at Træffehuset.

A replica of the FIFA 2014 World Cup replayed itself as most of the First Price team members were Brazilians whose team was defeated at the quarter finals, something the players made light of as well as the Germans and French on the team. Perhaps a little bit of luck should have stood with the German side on the team?

It was noted that the fan base support was rather small and few female fans were present, a fact that some players attributed to their loss.

“It would be more exciting to run after the ball with girls cheering for us. The atmosphere would have been different. I am sure we would have run faster,” said Per, who asked for his family name to be withheld.

According to the MSI leader Henriette Goksøyr, the organization team had not given much consideration into including females in teams .Perhaps that would have pulled a larger female crowd?

This year’s top scorers, Kristoffer Nilsen with 17 goals from Tjokk team and Simen Wifstad of Farlig with 16 goals, attributed their team’s success to team effort.

“We have won this cup in three successive seasons. Most of us come from Bergen even though that is not the reason we won, we have learnt that team work is crucial for success,” captain Christopher Nygaard from the winning team said.

At the end of the day, lots of pizzas had been served among the participants and a call for more companies to sponsor sports events. The day was summed up with a prize giving ceremony that kicked off the same evening at Vallhall, followed by an after party.