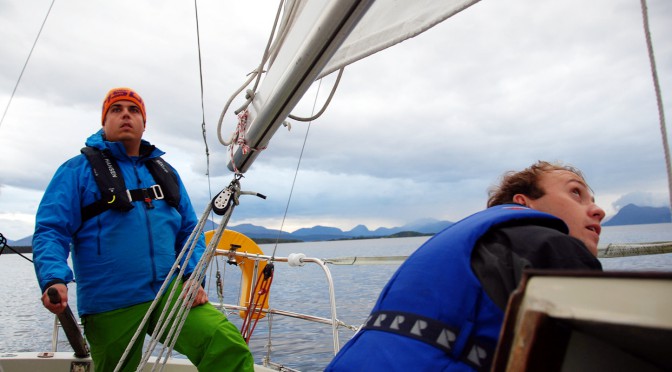 Even Simensen (left) and Henrik Dahlen - both HiMolde students - before winds of gale strength hit them. Photo: Pavla Ujmiakova

Autumn regatta sailing season begins in August, which was also starting point for «Team Tone» – the only team that is formed by students of HiMolde.

All students study bachelor programs. Anne Aakhus and Thea Johnsrud are enrolled in Nursing, Henrik Dahlen studies IT and captain Even Simensen is doing his bachelor in Logistics.

Even completed his sailing training after three weeks in Caribbean, and as he added:  “We sailed and drank rum.”

Even and Anne bought the boat in August to get some training in hope of sailing around the world, as Thea described on the way back from the race. For Thea, the time spent on a sailing boat is much needed relax after school or nursing practice in a hospital.

See more photos from the regatta on Panorama’s FB-page.

“We are learning while burning,” Even said, while explaining how long the team has been competing.

There were 13 boats competing in Molde regatta this week. For team Tone everything starts at Cap Clara, where they dock their boat. From Cap Clara it takes about one hour to get to Tøndergårdwhere the race starts. Usually the race starts at 5 p.m., but everything is up to wind conditions.

This Wednesday the only wind that was blowing the sail was the wind from the plane that was taking off from Molde Airport. The race was delayed and started at 5:10, when wind conditions picked up. Team «Tone» slowly gathered the speed towards a turning point. It wasn’t only a turning point for the race, but also for the weather condition.

The storm moved in and suddenly, as Henrik said afterwards: “There was all the wind.”

As the wind made its way to the sail, panic surrounded the boat and captain Even had to make a decision to fight on or to start the engine and leave the race.

“The wind was too strong for us,” he concluded.

As all the teams that finished the race enjoyed waffles and coffee while waiting for the corrected results, «Tone» headed for Cap Clara.

“This is the second time in row that we didn’t get the waffles,” Henrik mentioned, with a touch of disappointment.