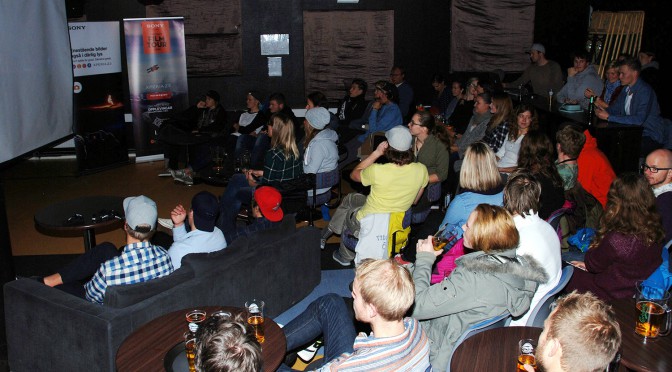 Valhall lived up to its reputation and brought students another eventful evening.

This time in a relaxed atmosphere where visitors could enjoy a couple of beers while watching two movies. One included footage gathered by Field Production, one of the most famous extreme sports movies production groups in Norway, to celebrate their ten years anniversary. The other one was Days of My Youth, a movie by Matchstick Production.

This spectacle was part of the film tour organized by Fri Flyt, the skiing magazine, which has visited both big and small cities such as Bergen or Volda.

Both movies deals with winter extreme sports. Winter is close, so snowboarding and skiing is soon going to be almost daily leisure time activity of many students and locals.

“The purpose of this tour is to celebrate that winter is coming and to get people excited for the upcoming season,” said Magnus Tveito, one of the organizers of the tour and a free skier who also appeared on the video.

The collage compiled by Field Production reflected both the skills in capturing the rider performances and their ability to make fun of themselves. That is a combination which a quality extreme sport movie needs. Parts of the movie have been recorded in Møre og Romsdal which is famous for its freeride opportunities.

“I would say that this area is one of the best for skiing and snowboarding in Norway,” Magnus Tveito said.

After both movies were over, a short after party followed. Then the crowd dissolved into nightclubs of downtown Molde.