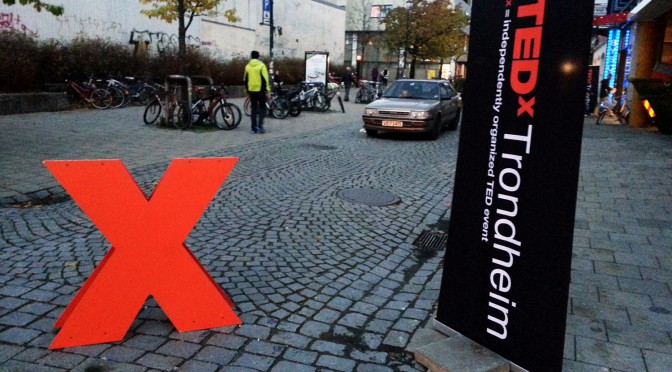 In front of Byscenen - the venue of TEDx Trondheim. Photo: Pavla Ujmiakova

Magic, music, archeology, Artic expedition and many more topics were part of the third year of TEDx Trondheim.

For those who are not familiar with TED talks yet, TED is non-profit organization was established in 1984 and its mission is to spread ideas which will inspire people. Nowadays, TED covers almost all topics in more than hundred languages. Apart from original TED, there are separate events called TEDx which independently spread ideas in communities around the world. After each TED or TEDx the talks are uploaded online for everybody to watch.

Trondheim has a team in charge of TEDx which organize various events during the year. The team is built by young people interested in building community of inspiring people and people which want to be inspired. The team consists of creative, web, media and partnership, event team and many volunteers. They organize social evenings, live streaming of original TED and various art projects.

The main event of the year is TEDx Trondheim, which took places Friday 24th of October at Byscenen. This year’s theme was “The Unseen“. As usual the talks are aiming to reach audience from different backgrounds by offering speakers from diverse professions.

“The TEDx Trondheim is not so popular,“ said Laura Brodbeck – the evening’s host – while explaining they are in search for social media volunteer to help them make the event bigger.

At the entrance to the event, everyone got a nametag with occupation, nationality and three things that the person would like to see. Those name tags had to be filled out when buying the ticket online. Also there was the possibility to buy the ticket at the door and fill out the tag. The aim of this was to help people to socialize during the planned breaks.

Each session started with online streaming talk followed by three speakers. The online streaming was a surprise for many spectators since it was not mentioned in the program schedule and people did not expect it from the live event.

First session‘s “Behind The Scenes“-speaker Espen Holmgren introduced his work with addicted people and how he is searching for the unseen inside them to help them find the good that will introduce a better path for their lives. He also spoke about how he is taking his future employee to the wild to uncover their true self.

Following speaker Peter Berg is professor of physics at NTNU. He explained how physics work, how their theories do came to life and what the general audience should understand about them. First session closing speaker was Josefin Winther, famous Norwegian song writer. She described the creative journey of songwriting, the any stages she has to go through and how all the things have to come together to create the “magic”, as she called it. She decided to demonstrate on the stage how she does it, came up with a melody and words from the present moment and feeling, and received the biggest applause of the night.

Second session – “Past, Present and Future” – started surprisingly by TK-9249 walking on the stage. TK- 9249 is a Stormtrooper, part of 501st Legion in Scandinavian countries. The legion has been active since 2001 and currently consist of 140 members. These troopers are attending various events. They donate their profit to children and visit them to bring the happiness to their lives. Next speaker, archeologist with NTNU University Library, Alexandra Angeletaki, introduced their project of brining old books to life with new technology. Third speaker for this session – Åslaug Kihl – spoke about her work as social worker in Trondheim Prison and a project that is helping the prisoners get back to life outside the prison walls and help them to stay there. The last speaker was Andy Chen, who started talking about emotions that are lost when we spend time online and surprisingly finished by talking about quality of music lost by streaming. He introduced his project that works on bringing the quality of music back.

After last break, session three – “The Road Less Travelled“ – began with Tobias Thorleifsson, an Artic explorer who followed Norwegian explorers footsteps. His talk about untouched Canadian Artic aimed to make people think that the Artic wildlife should stay untouched by humans. With this session’s second speaker the magic attended the stage. Christian Wedøy introduced the audience to his approach to magic of the 21st century, a century where people are more educated and do not believe in supernatural life as people did in the past. Magic cannot be hidden from the audience by covers, but has to be presented for the eyes to see. He performed his example on the stage with assistance from several people in the audience. The last speaker of the evening, Berit Nordstrand – a cognitive therapist and specialist in clinical pharmacology – explained how the food we eat can help us live better lives.

After the talks were finished, there was a little contemporary art piece presented on stage. The team also prepared a gift for every attendee. The gift was a sack filled up with sand from all over the world which represented a time. People were invited to stay for drinks and socializing after the talks, but the event was almost an hour behind schedule and most of the guests left.