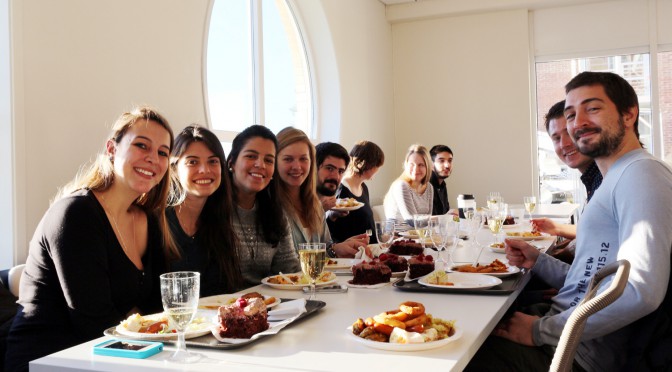 ESN organized its protest petition at Himolde today while students and staff celebrated opening of their new dining establishment.

On the occasion of International Student Day the Erasmus Student Network (ESN) at Molde University College organized a protest against governmental proposal for tuition for international students from outside of European Economic Area (EEA).

“We built up a stand which provides information on how the students of Himolde would be influenced in case this governmental proposal passed. 50% of International students would be affected and it is possible certain courses such as event management or sport management would not be taught anymore because there would not be enough students.,” said Luiza Oancea from Romania, ESN Molde president.

Events like this has been organized at universities all around Norway either by ESN, ISU (International Student Union) or in cooperation between the two. The intention of ESN Molde is to forward their petition to the Ministry of Education of Norway to make it clear that students and university staff at Himolde are against the tuition fees.

“We have not discussed this issue in a University board yet, we are waiting for the governmental decision on this matter. But I feel that there would not be any fierce discussion, the majority is clearly against tuition fees,” HiMolde rector Hallgeir Gammelsæter said.

Towards the end of the afternoon, when rush hour in the main building of Molde Campus  was over, the ESN gathered over a hundred signature and they are going to carry on with their effort.

ESN was fortunate that in the same day the newly refurbished cafeteria has been finally opened in its full capacity. The opening ceremony included free buffet, beverages and cake. This naturally attracted a big crowd of students and university staff. The queue stretched out of the cafeteria right past ESN petition stand.

The new kitchen area has been open for some time, but today the dining space with view over the fjord opened for students, staff and vistitors. The new cafeteria provided students and staff with significant improvement.

“It cannot be compared to the old cafeteria. We have modern equipment and better working environment. It is safe to say that this is the best kitchen in Molde now, and I love it. “ said chef Asgeir Hoel,  who is also known for probably being Norway’s strongest chef.

Even though cafeteria is fully operational now, there is more to come and all the refurbishing has not been finalized yet. Student house Valhall is going to find its new home in a space shared with the cafeteria.