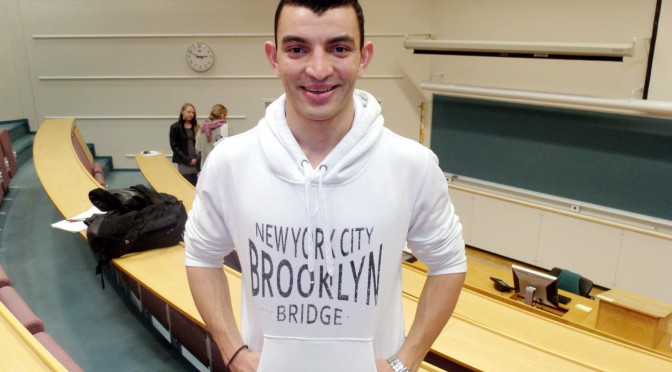 “Men are like Bluetooth, they work if you are close to them. Women are like WiFi, they are connected to just one suitable network,” said Tarek Nader, 25, as he recalled his long distance relationship.

Living apart is not an option many couples would consider, but sometimes they are faced with a valid decision of living separately due to educational or financial reasons. As Tarek left Egypt for Norway to study at Molde University College (Høgskolen i Molde), his world came crashing down when his fiancée called off their engagement months later. Distance between the two could not have mended their relationship; however, Nuria’s case was different.

“It was relatively easy for us while I studied abroad. My husband and I kept in constant touch because communication these days is smooth and easy, we travelled back and forth several times a year which also helped,” explained Nuria Spijker, 25,  MSc in environmental and infrastructure planning at University of Groningen, Netherlands.

Under the most ideal circumstances, a separated couple’s relationship may seem empty and unsatisfying at a distance irrespective of technological ease. Skype calls, Messenger and phone chats do not fulfil the warm proximity that comes with an intimate and romance-flowing relationship.

“It is a very bad situation to be in. There is not much gain in long distance relationships and couples need to be dedicated to make it work. In normal circumstances, such relationships end after a year unless the couple is very dedicated,” said professor Frode Thuen, from Bergen University College, a leading Norwegian psychologist who specializes in family psychology.

Loneliness and emptiness do certainly crop up from time to time because even under normal circumstances, relationships need work to keep the fire ablaze.

“Nils and I had been together for only two months before I left Germany to study in Norway and we are still completely in love, although it is very hard to be separated,” said Mona Dietel, 24. “We call each other every day and night before going to bed and talk about our feelings and how happy we are that we know each other,” she added.

For couples living in different time zones, communication becomes another force to reckon with.

“I sleep quite early and this had probably been the most serious arguments as to ‘we never talk’ but we have of late come to not schedule Skype calls and stick more to messaging,” said Wanja Kamau, 30, procurement manager in Kenya who is in a similar predicament.

The subject of jealousy in distant relationships has not been sidelined. Mona continued, “He is a good looking boy and I know girls like him, but he is more jealous because I get to know lots of  people while abroad; however, we are in a stadium where none of us eyes another girl or boy and his recent visit to Molde strengthened our relationship.”

Wanja supplemented by stating that, “Alan has been completely understanding. He trusts me and that is what matters most. I don’t get jealous really, I believe that what I don’t know won’t hurt me.”

“Most couples do struggle with thoughts of jealousy and the uncertainty of what is going on. It therefore becomes quite difficult to sustain a healthy relationship based on this unless the couple is totally committed to each other,” professor Thuen added.

Many times cases of cheating or the temptation to do so has occurred among spouses, and this can have psychological effects on perhaps the faithful partner who was committed on making the relationship work out.

“I was 18 years old and started dating this girl who lived in Albany, New York, at the time. We dated for two years. I drove there for three hours per trip from Rhode Island every other weekend to see her and she came over as well and that was not economically friendly to us,” recalls Chris Fuller, a 27-year-old political strategist and writer in Providence, Rhode Island, USA. “She was nice, interesting and fun to be around, but things sort of fell off when I got to know that she had been visiting this friend in New York City whom I didn’t know. I was deeply broken.”

But then, distance is not at all lenient to couples with kids. The responsibility of running a home while the latter is away is not as easy as it sounds.

“I remember the first weekend spent in Molde very clearly. I kept looking at my one year old son’s photos and phone video recordings, but could not help crying all weekend long. It was one sad moment for me,” said one student who preferred to remain anonymous. “Since I knew that I was coming here for Master’s program, I had to stop breastfeeding earlier than the normal breastfeeding duration.”

This situation is very painful for the mother, Frode Thuen said, and it will influence her studies, but it also depends on the people surrounding the baby like the sister, aunt, grandmother, and the father. These individuals’ role in the baby’s upbringing may bring a little sense of relief to the mother who is separated from her child.

Needless to say, the financial implication of distant couples seems to bite harder than imaginable.

“My fiancé and I financially depend on each other. I am eligible for educational financial aid from Lånekassen and that has helped us pay for housing and minor bills, while his meagre income catered for groceries and daily expenses when we lived together during my bachelor years. By moving to Molde to study for a master’s degree and leaving him behind, our plans have been ruined since none of us can afford to meet all the expenses independently. This has had a toll on our relationship, but somehow we manage to pull through,” mentioned another student who did not prefer to reveal her identity.

At the end of the day, long distance relationships can and do work, but they take a lot of effort and commitment. Trust is the number one  ingredient in a healthy relationship.