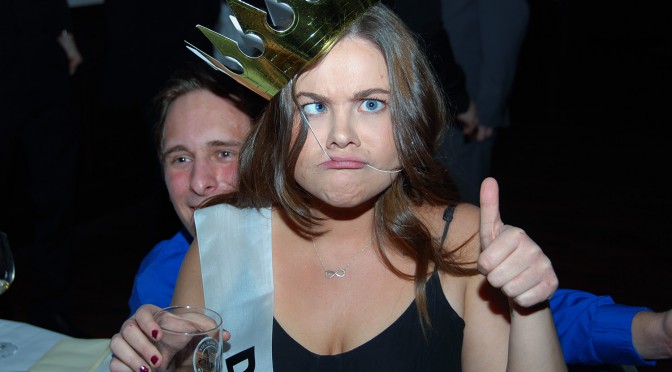 After four months of detailed planning and preparation, the much-awaited New Year’s banquet (Nyttårbanketten) took place on Saturday evening at Hotel Alexandra graced by close to 300 students and staff from the university college.

Martin Ødegaard, 16 year old Norwegian football player who was recently signed by Real Madrid CF, was the focus of the speech given by Molde University College’s Rector Hallgeir Gammelsæter. He pointed out that despite Ødegaard’s talent and skills, obsession with the very best possibly overshadows the fact that everyone has talent that should be celebrated.

“You are all talented and have special gifts to develop in 2015,” he said.

Equating himself to a father figure and cautioning that though the students partied, it is impossible to run away from the seriousness of life. Gammelsæter admitted that it takes a long time to get messages through to young people, something his son realized after becoming a father a week ago. The new dad sent this quote by Charles Wadsworth to his father:

“By the time a man realizes that maybe his father was right, he usually has a son that thinks he is wrong.»

Se photos from the event on Panorama’s Facebook-page.

The event organized by iStudent put together a committee from Erasmus Student Network (ESN) Moldestudentenes Idrettslag (MSI), Karriereforum, Studenttinget and Valhall that meticulously served all in attendance.

“We have been working together since October last year and decided what this event would be like. It worked well since everyone contributed,” said Tonje Sannes Drivvold from iStudent, who was in charge of organizing the event.

Social mixing began at 8pm, dinner was served at around 9pm and an after party followed at Bar Alex, a venue that made even the music snobs lighten up. The night’s host, Maria Holland Tøsse – an artist and public speaker – performed numerous songs and did not disappoint.

Opening remarks from iStudent leader Ole Martin Bjørnvik Mundal was followed by a Russian dance performed by Alexandra Boyarinova during a sumptuous dinner marked the event’s program, but the highlight of the event was an award ceremony based on who had gotten the most social media votes.

Here is a complete list of the night’s winners:

Clown of the Year: Matt Baker a.k.a. Matthew Lunn

The Most Including Person of the Year: Øystein Jahren

Most Charming Person of the Year: Tapio Stensletten

King of the Year: Øystein Jahren

Queen of the Year: Gina Husøy

The Night’s Most Handsome: Lasse Brandal