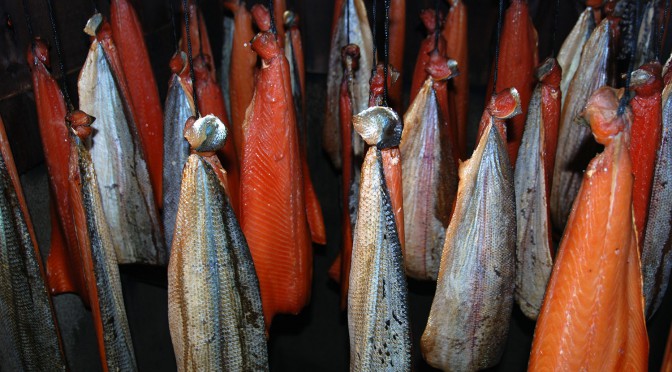 The production technoque used in Drågen Smoke House is traditional. The fish is hanging while it is being smoked and dried. Photo: Pavla Ujmiakova

After a few people tasted the delicious fish and we got wind of it, Panorama opted to go behind the scenes and find out the story behind this traditional Norwegian fish smoking business. On a windy and cold afternoon our appointment with business entrepreneur Petter Aune (49) holds water. He cheerily picks us up a few meters from his business location in the center of Molde, and as we take the 45 minute drive to his smokehouse the interview naturally takes shape. It comes to our attention that the company is located in Bud in Fræna municipality, where the fish smoking takes place. But his sales occur in Molde city for the obvious reason that more sales are made in areas with a bigger population.

If you have been keen enough, a yellow van located on the town square in Molde may have caught your eye. There are several kinds of smoked fish for sale at the van, particularly smoked salmon, smoked trout and smoked salmon infused with whisky. The van belongs to Drågen Smoke House and Petter Aune is the owner and proprietor of the business.

Petter, a Molde local and father of two daughters, have a vast amount of experience from work at sea and in fishing companies on a managerial level. He started out in the fishing industry at the tender age of 15 and worked with Kjell Inge Røkke at the American Seafoods company long time before Røkke became Norway’s wealthiest man. It is essential to note that Røkke also hails from Molde. Petter’s working experience extends to foreign countries such as Russia, Alaska (USA), Argentina, Chile and Antarctica and this experience has enabled him to produce some of the best smoked fish products in Norway.

“Working in Norway was the hardest, because it involved a lot of both physical and paper work,” Petter said.

When he started his fish smoking business he tried using other fish such as catfish and mackerel, but settled for salmon and trout since he wanted to specialize and be different by producing smoked fisk of the highest quality. While he worked in Russia as a manager at a fishing company, he saved much of his income for seven years and hardly took vacations because he had a vision of starting his own fish smoking company. With a small loan from the government his dream was achieved, but it was not an easy journey at the beginning.

“We experimented a lot and made losses since some fish could go to waste, but with time we got better at it,” he said.

On a weekly basis the company, which four employees including Peter, smokes 700 kilograms of salmon and trout which is sold to various customers such as all Coop and Bunnpris stores in Møre and Romsdal county. Fenaknoken, a Oslo shop specializing in Norwegian delicacies, is another customer.

In Molde big companies like Brunvoll and Glamox takes their customers on tours to Drågen Smoke House. Last December 500 kg of smoked salmon from Drågen was sent to Germany as Christmas presents to customers of Glamox Aqua Signal.

Depending on demand and the seasons, more or less of fish will be smoked at Drågen. The months of November and December are the busiest leading them to smoke about four tons a week since many purchase salmon for own consumption and gifts during the holiday season.  February is quite slow for business as most shops are overfilled with smoked fish after they have run out in January due to the Christmas season.

Peter has a license for smoking organic fish, a license that only three others hold in Norway. His marketing strategy is mainly reliant on word of mouth. An example he gives is when he sent a sample of his fish through a friend to one of Norway’s most profiled chefs, Arne Brimi, who was impressed by the unique taste and from that moment has used Drågen’s smoked salmon in his cooking and restaurants. Besides word of mouth, which has been effective, Drågen Smoke House has a website (www.draagensmokehouse.com) and is present on both Facebook and Instagram.

Petter gets the fish, which is already prepared and ready for transportation, from Aukra. His van picks it up in Molde and transports it to Bud, where the hangs the fish for drying and smoking for several days. In the smoking process Drågen Smoke House uses a mix of broadleaf trees and fresh einer shrubs (common juniper) that grows around Drågen. The finished product is then packed and delivered to various destinations. His company had a revenue of around four million Norwegian kroner last year, which he hopes to increase to over to six million kroner this year.

This year Petter Aune will be participating in the Norwegian Championship for smoked salmon and trout for the first time. He will be sending samples to Trondheim this spring.

Besides fishing and smoking fish, he loves football. Molde Football Club (MFK) is his team and his favorite player is Daniel Berg Hestad as well as Chima Chukwu who left the Molde team. Petter continually attributes a special liking for Berg Hestad due to the fact that the player comes from Molde and is a good player, giving his all to make the team a better one.

Karaoke is also another of Petter’s hobbies, but says he can only sing after taking two glasses of cognac.