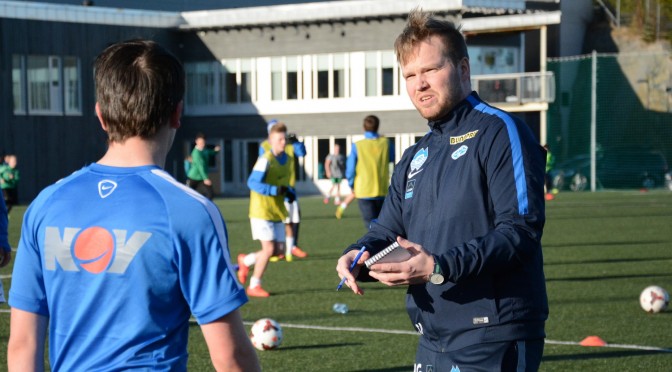 Fannar joined professional football at the age of 17 playing for the Icelandic football teams Njarðvík, Keflavík, Grindavík and Reynir Sandgerði as a midfielder and winger, before suffering multiple injuries to his ankle and thigh, a setback that led to his coaching profession.

“I was a clever player and understood football,” he says.

The head coach Freyr Sverrisson, who knew about his plight, invited him to help with coaching the team for the 19-years old and was impressed.

“Since then, I got hooked on coaching.”

“After a couple of interviews and training sessions I became the favorite candidate for the coaching job.”

He says his coaching style is calm, collected, organized and practical.

“The welfare of the player comes first. Winning or losing is not a big deal for me, but that the player needs to learn and take responsibilities that will help them in life. I have coached former players who are now playing in big clubs such as Bristol City FC, PSV Eindhoven and FC Kaiserslautern having adapted some of the skills they had learnt from my coaching. Besides playing beautiful football, making the players better is most important. With a good team the results will definitely be good.”

Fannar still has a clear recollection of his first experience at MFK as a coach.

“They had never seen or heard about me before and did not know how to approach me. I spoke little Norwegian and mainly communicated in English. This made them curious, but with time I gained their trust. The players will always know when one is not serious. You simply earn their respect by the work you do.”

The difference between coaching in Iceland and MFK is that it is more professional at MFK.

“Previously, I had to do everything by myself, but duties are delegated at MFK and it is much easier since we are two coaches working together.”

A normal day of practice begins with a meeting and a chat with his fellow coach where they decide what to do for the day before beginning the training sessions.

The G15 team’s formation is 4-4-2 and the defensive system strategy is based on ten bullet points for every position.

“The players have obligations in the team and a role to play. The bullet points have to be covered in the field. One player can make a mistake which can cost the entire team, but if many players make many mistakes then there is a big loss.”

When it comes to disciplining the players, Fannar believes that the biggest punishment is for a player not to attend practice.

“Unless they do something very bad, perhaps kick the referee, then something can be done about it. I do not like to look at practice as punishment. The players look at sprints as punishment, while I look at it as practice.”

He has made several mistakes as a coach, but one that he can recall is when competing in the fourth division with the second team he coached in Iceland and he used a young player who was not ready to play.

“It took a lot of practices to boost his confidence once again.”

His way of handling stress and criticism is very positive.

“I am not sensitive to criticism. I cannot stop people from saying what they want. At 31 years old I am beyond that.  I am stressed when taking exams at school, but in football I do not know stress. I am passionate about football and a workaholic as well. If I am not coaching or playing football, then I am watching it. I am a football nerd.”

His plans are to complete the education to get a UEFA B-license in January, and then apply for the UEFA A-license and finally the UEFA Pro-license.