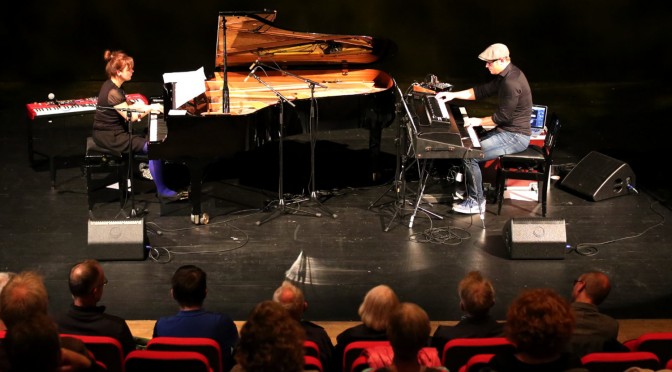 Tuesday night Czech composer and pianist Beata Hlavenková for the very first time performed her Scintilla suite in front of an audience. The venue for the world premiere was Teatret Vårt in Molde.

She performed Scintilla – composed by herself – together with Norwegian pianist Anders Aarum . The concert was part of the national Humanist Week and also the first performance in the duo’s ten-concert Norwegian tour, which is partly financed by EEA cultural grants.

The truly exceptional piano skills of both musicians – in their debut performance together – welcomed the Molde public. The soothing relaxing tones left the audience with a feeling of fulfillment and a little bit of nostalgia. But mostly, through every accord an attendee could feel Beatas gentle personality, which I could discover in a post-concert interview.

I have just finished a recording project at home which was exhausting and I have to say that just seeing those mountains from the airplane window gave me the energy boost I needed. I am from Prague, the capital city of Czech Republic, where one does not get a lot of contact with the nature. So I even went for a run right after I got to Molde to enjoy it.

How did the project of the Norwegian tour begin ?

A year ago I found out that EEA( European Economic Area) through Norwegian Funds offers a grant for performing arts. There were 50 applicants and I was among 16 who actually received it and the only individual person. Part of the grant proposal was that producer  Bjørn M. Hansen – whom I knew from the Czech recording studio Sono – will help me to manage the project and he offered me the cooperation with Anders.

Tell me more about the tour itself.

It consists of ten performances of Scintilla  around Norway.  From now until the April 2016.

Where did you get inspiration for Scintilla, the suite you played at the concert today?

Scintilla means a spark in latin. And I believe that having a spark start us up towards certain activities and allows us to enjoy it. I think that those sparks are immensely important. So I picked it as a main motive for the project and because Scintilla has nine letters I wrote nine compositions which names start with the same letters which Scintilla contains.

Your last solo album, Theodoros, was dedicated to your younger son Theodor. Tell me more about the album.

It is very important for me that the music I compose has a program. That it is not just purely imaginative, but that there is something specific behind it. The first album I recorded was called the Joy for Joel. Joel is my older son. I recorded that one in USA with various jazz men and that one already had traces of program in it. And Theodor is the name of my second son, so the album bares his name.  In Theodoros the program is really strong.  The program in Theodors are the twelve months of a year. How do I perceive them and how do  I feel during that time.  I play Theodoros in one piece without brakes for ovation to keep the program intact.

How would you define yourself as a musician?

I like to be perceived as genreless. I enjoy simplicity and even though in the past I was being categorized as a jazz composer I never felt that way. I never really enjoyed the jazz standards, I have always modified them a little bit. I like to feel that there is a piece of me in every composition I write. I studied a classical composition before I studied jazz, which I believe gives me a valuable insight. Also I am very influenced by cooperation with Lenka Dusilová (journalist’s note: famous Czech songwriter) with whom I have been working for ten years.

What do you see as your biggest success?

I would say it is my family. That does not mean that I put music aside. I remember that two and a half months after the birth of Joel Matias, I went to Turkey to play a concert. It was tough, but I cannot be without my music. Lenka Dusilová once said that music is like food. That resonates with me. I chose it as a sort of motto to live by. But I also think that if I did not have my family, the music would not fulfill me completely.

How are your family life and music life combined?

Well, it is not easy because my husband and I are both musicians we have one joined project and many individual. The children are either traveling with us or stay at their grandparents.

You teach music as well. What does it give you as a musician ?

Teaching mainly reveals to a person how much they do not know about the certain topic. Or how much they lack systematically. It helps me to summarize and clarify many things.

Which of your albums is the most significant for you?

Definitively Theodors, and then Eternal Seekers – which is a project with Lenka Dusilová. They both received a prestigious Czech musical award Anděl.

Do you write your lyrics as well?

For the one composition in Scintilla where I sing, I wrote it myself. But I also cooperate with Justin Lavash.  I consider to have some lyrics for Scintilla written in Norwegian. Anders’ wife is a singer who released an album recently which I really like.  So I believe she could write a passage or two for me.

How did you get into music in the first place ?

Through my parents, who both play musical instruments. They led me to music, not forcefully in any way though.  My mother could not study at the conservatory of music during her time, because we had communism back then and her family was pretty active in the Christian community.