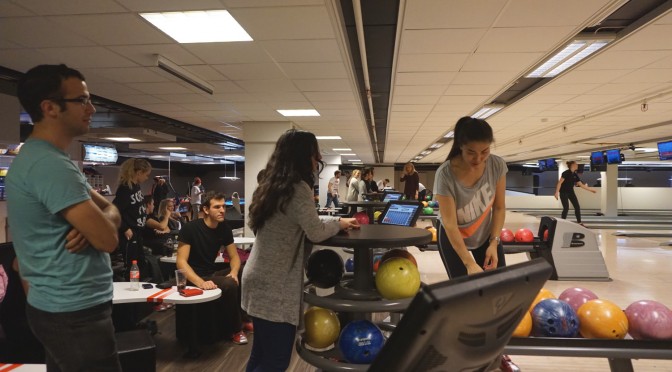 Recently, it has rained a lot here in Molde. Sports like football, hiking or running seem to not be enjoyable in such rainy days, but bowling is a good alternative to relieve pressure in study and in life. Last Friday, students went to Moldehallen to enjoy a relaxed and happy night together by bowling.

The bowling night started at 8.00 p.m. There were not many students that showed up at the beginning, but eventually the bowling center was filled with people and two of the lanes were run by Molde students.

There were unexpected conditions when the game started. The equipment was broken on both lanes, which made the atmosphere a bit awkward. Fortunately, problems were solved quickly and the game could move on.

There were several bowling beginners among the players, so some of the more skilled students were asked for suggestions. The most impressive answer was made by Kristanna Anderson.

«Luck is my best skill,» she offered.

While it’s true that luck is a tip for success, the standard posture was the best skill for Kristanna. A beginner proved it by bowling a strike  under Kristanna’s supervision.

Lora Faraji added that a suitable ball is another secret to bowling well. The ball should be selected according to your height, weight, and movement speed used when throwing the ball, which may take some trial and error.

Aleksandr Rozhdestvenskii was the winner of the game with 120 points scored in total. Actually, many of the players bowled a strike by his suggestion to “lower your release level.” He was a really good player, and everyone was cheered up every time he got a strike.

What’s more, during the game, international students and Norwegian students used different languages to praise each other. This cross-cultural communication really added to the activity.

Bowling is a good way for people to relieve pressure and bring about social communication through sport. This kind of indoor sport isn’t affected by the weather and can be played by people of all ages. Also, anyone could get a high score, regardless of good or bad personal constitution. It is said by one of the bowling center staff that playing bowling can get 104 muscles trained in your body!