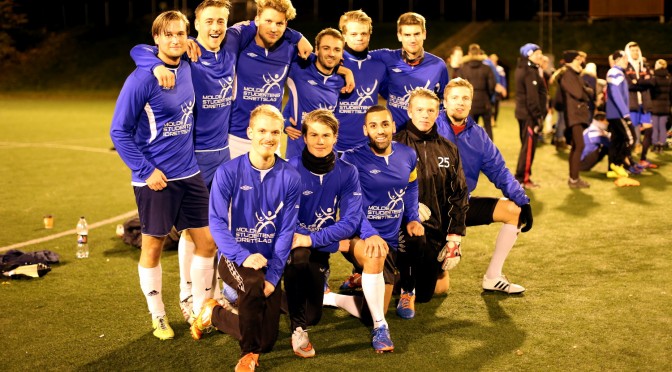 Late Thursday night on Lubbenes kunstgressbane in Molde, the students played against Forza Ferske – a team of friends – to decide the winner of the league.

When asked before the match if MSI had faced any strong competition in the league, Vegard Rangsæter responded:

This rather confident statement summed up MSI’s season pretty well. Going into the final, the team had a win/loss record of 13/1 and a goal differential of 91 to 17, or +74. This match did nothing but improve these numbers.

Håkon Stensaas was the first to find the back of the net, putting MSI in the lead. Forza Ferske managed to dribble in the equalizer in the first half after their wide open striker fooled the goalkeeper with a fake shot. However, Rasmus Nybo blasted a beautiful top shelf strike just before halftime to maintain the momentum.

The second half only got better for MSI. A corner from Ole Knudsen caused an opposing defender to score an own goal, and Alla Abdallah knocked one in from left wing as well.