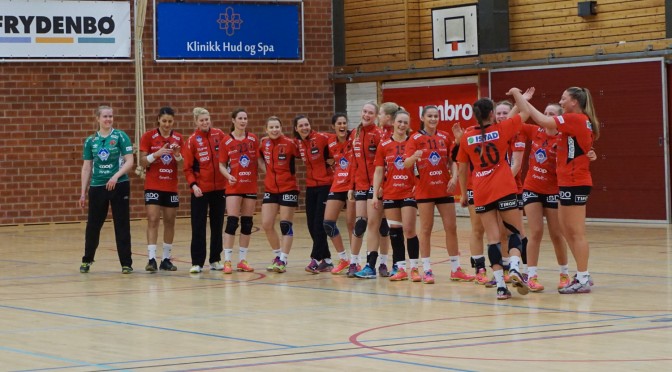 End-of-match celebrations are so much sweeter after a win. Photo: Eden Gao

The rematch between the Molde Elite and Sola took place in the cup quarterfinals. Though Molde has yet to win a match in league play, they continue to perform at a higher standard in cup matches, and this one was no exception.

GRADING GAMES. Molde’s key to success in this game was their ability to consistently force turnovers. The girls were also converting a high percentage of these turnovers into goals in transition.

This theme for the night was immediately apparent. By scoring on the first five possessions, and forcing turnovers between them, Molde was able to race out to a 5/0 lead. Though Sola was able to tie the game (11/11 in the 23rd minute), Molde was never once actually trailing.

The second half picked up right where the first half left off. By the end, the Elite had only half of their starters on the field, yet they still wouldn’t take their foot off of the gas pedal. A series of three consecutive steals in less than a minute assured the victory as well as passage into the semifinals of the cup.

Anniken Obaidli, match MVP with 11 scores, commented on the difference in the rematch:

«We were more prepared mentally. We also had a lot more energy.»

Also, when prompted with the statistic that Molde received two-minute penalties only twice, she expressed her opinions on how her team avoided yellow cards in this game: