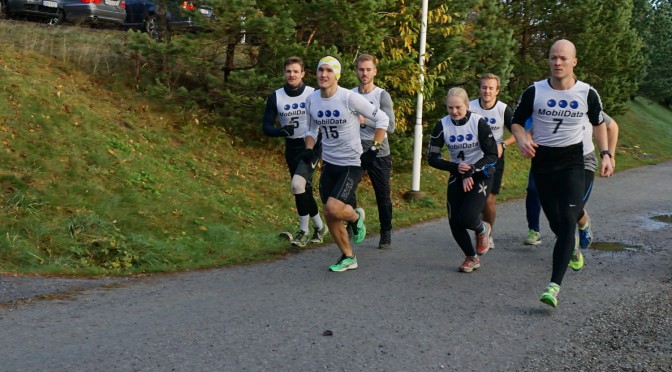 It’s Movember. MSI (Moldestudentenes Idrettslag)– The Molde Student’s Sports Team – organized the Movember Run to raise public attention to male health. Participants were free to entry the event and three winners of the run were awarded with gift cards offered by G-Sport. Also, there was a prize for the runner with best moustache.

There were totally eight participants – including only one female runner – which was quite a small proportion of the whole HiMolde population.

“We raise the event to draw people’s attention to male health problems and want to enjoy running at the same time,” said Alla Abdallah, the second leader of MSI. “Actually, we are not so happy with only a few students attending this event. But we know that a lot of students are busy studying now, and our teachers have meetings today. Anyway, it’s mostly for fun.”

Olger Breivik Pedersen won the competition finishing the 3 km running in 11 minutes, and got the biggest prize offered by the G-Sport shop.

When asked why he came to run, Olger said:

“I come here to run for fun, because I love running. And also, I think it is a good class for me to participant in the charity event.”

The second and third winners came both within 12 minutes.

Helene Bredal was the only girl in the running race, completing in 15.13 minutes.

“I enjoy running for fun and I am good at running. I run five times a week,” said Helene.

The prize of best moustache was won by Knut Hofgaard Eikre, who is a member of the sports team. Knut kept his moustache for the Movember event in November and the moustache really make him looks charming.

Meanwhile, the Petroforum – a student association for students at the Petroleum Logistics program in Kristiansund – is arranging a moustache competition for the whole of November.

Here is a short interview with Henrik Wærdahl– chairman of the organization:

Why do you hold the moustache competition?

Petroforum´s goal with this event is to gather and unite the community around Molde University College towards the awareness about a serious health issue. We therefore hope that as many as possible will join in growing a mustache – women, be creative – and post it on our Facebook event.

How much money do you expect to donate by the event?

For each moustache posted on this event, we will donate 50 NOK. Last year we had 28 fantastic people who posted a picture on the site, both men and women, to contribute to our donation. This year, our goal is to get more moustaches than ever before, and to do so, we need your glorious moustache! Petroforum has, in addition to this event, created a student team which every person related to Molde University College can join. Feel free to make your own donation if the urge to support men´s health is present.

How many times you have held the event?

Petroforum has now arranged this event for three consecutive years. We find the purpose of this awareness month to be of significant character, and hope to make an impact on how men at Molde University College think about their way of living as well as their health.

When will you choose the weekly/monthly winner?

For more information about the moustache competition, you can go to Petroforums’s event page on Facebook. To join in the fundraising, you need to register on Petroforum’s team page on the Movember Norway website.