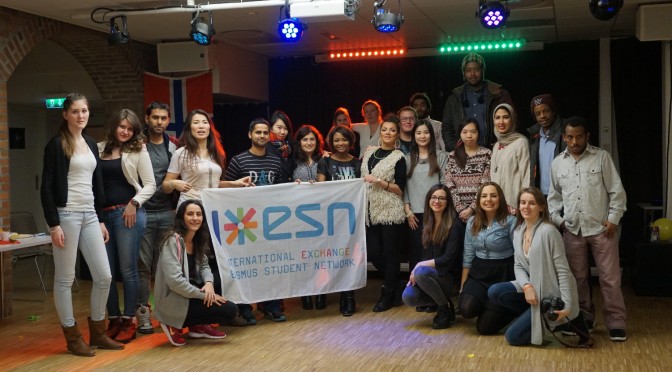 With the arrival of final season, this semester has almost come to an end. Due to the fact many of the international students will go back to their home countries after finishing the exams, ESN Molde held a Goodbye party for them to celebrate the end of the semester and say goodbye to each other.

The intensive final review didn’t stop students from enjoying a party time at the weekend evening. As one ESN member said: “Since we have completed this week’s examination, it’s now time for a short break.”

Although some of the students showed up with tired faces, the atmosphere was lighted up by the colorful neon lights and glow-in-dark bracelets. After enjoying talking and dancing with each other, several games were organized by ESN members.

The first game was to quickly present suitable posture according to orders. The funny postures played by students representing an elephant, a super model or a superman made everyone laughing.

Besides, other games including step on the balloons, grab a seat and build a tower with a rubber band were well-organized and also quite interesting.

Last but not least, ESN members prepared a small quiz about Norwegian culture, which provided an opportunity for international students to test their cultural knowledge gained during this semester.

For most of the international students, the Goodbye party was the last chance to gather and have fun together. As a result, many of them expressed leaving blessings by writing on each other’s white T-shirt. Although the semester in Molde finishes, our friendship will never say goodbye!