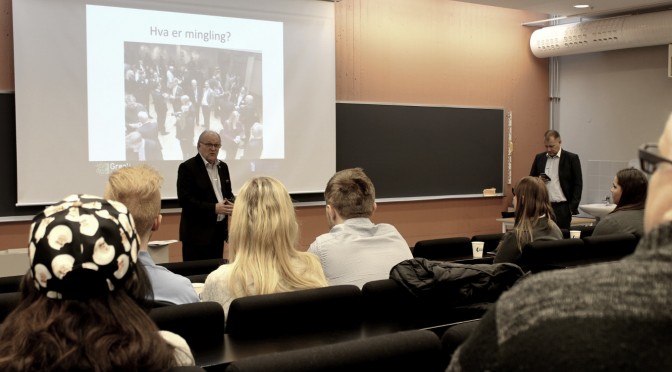 Having a good-looking CV in hand is not enough to get a job; students also need to know how to «sell» themselves to employers in the proper way.

Knut Grønli and Kristian Grønli from Grønli Gruppen had a training session at HiMolde yesterday on networking. With forty-six years of experience between them, Knut and Kristian brought the most practical topics to the training course. They also provided top tips that HiMolde students can put into their pocket to prepare for the career day next week.

– As you said, it is wise to approach and start networking with a group which has open spaces for newcomers. However, what should newcomers say to open a conversation with that group?

– It’s very rude if you try to stop the ongoing conversation and turn the topic into what you prefer. The better approach is introducing yourself, asking the person next to you about the topic and following it. Not starting by talking about yourselves, you can create a link by asking questions that you want them to ask you again in the next stage. For example, you can ask about what they do, what their businesses are, etc.

– In networking, it is common that some people attempt to spread and get as many business cards as possible. So, how do you think about the balance between quantity and quality of networking?

– Quantity is about the spamming people and I‘d like to say that it is not a good strategy at all. Sharing out a lot of business cards is seen as being unfriendly and people will get bored with your face. It never works. My strongest answer to this is don’t ever take quantity over quality.

– Do you remember any funny stories that you have seen or experienced about networking?

– It isn’t one particular story. But, there is a thing that I see almost every day in networking. There are some people that have a need of turning every conversation to be about them. Whenever they go into a conversation, they want to be the center of everything. It is kind of a “me, me, me” person. We also laugh at business card spammers as well.

– In career events, what should students say to employers to impress them?

– It will be impressive if you tell a story, a vision and a milestone about your future career. Then, when you send the follow-up email, you can refer about the last conversation. It creates good feelings about you to employers. It is noteworthy that you should send the follow-up email within 24 hours after the talk and before 10 p.m. The most appropriate time is the next morning.

– In networking, how can we say goodbye and move to other groups in a polite way?

– First of all, we should start by learning from the French. In France, they don’t say «Goodbye», they say «See you later». So be more like a French. We should also make a follow-up. Be open for connection all the time, but not pushing to people. For example, you can say: «I would be happy if you add me on your LinkedIn account.»

The Grønli-course in networking was a part of Karriereteaser, hosted by the student organiszation Karriereforum at Molde University College.