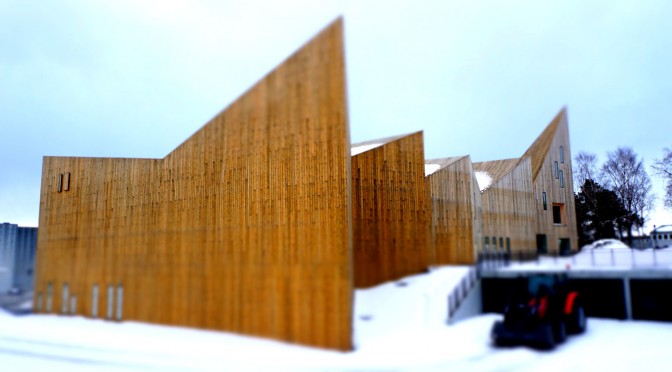 Molde’s newest public building serves first and foremost as a museum, but also doubles as a library. It offers much cultural intrigue.

Finally, the 145.5 million kroner museum in Molde has opened its doors to welcome people from near and far. Reiulf Ramstad Architects gained inspiration for the bizarre roof construction from the mountains that surround Molde, the 222 peaks across the bay, and the shape of the bridal crown. Therefore, the new museum building is also called the «Krona» (The Crown). The building was constructed almost entirely out of wood; even the booklets to introduce the exhibits and projector screens are made of wood. So, what attractions does The Romsdal Museum have to offer?

1. Learn the history of Molde in two minutes

The exhibition will satisfy local curiosities, such as the origin of the large rose on the wall downtown and the rich history of Molde as a town of public officials of Romsdal Amt, which later became Møre og Romsdal county.

Two house-shaped wood screens are set up in the main room to illustrate the exterior and interior of the Veøy vicarage. The ambiance can be felt when you sit on the mausoleum-shaped benches and prayers can be heard coming from beneath. Further in lies an area presenting the prosperous trade of fishing, shipping and boat-building in Romsdal. This is illustrated with a real boat accompanied by the sound of seagulls and scenes of the coastline.

The museum offers a secret tunnel with a special entrance that leads to a fitting room where children can dress themselves as a king, queen, prince or princess. In a coffer in the main room, there are «magic» glasses which allow you to explore Romsdal’s history via 3D photographs. Finally, your creativity can take flight again via a Lego game with wooden sticks.

Kurt Schwitters is a famous German artist who is well known for his collages in an art style he titled Merz. In addition to his collages, Schwitters also became known for dramatically altering interiors. The most famous was the Merzbau, the transformation of the interior of the house into a work of art. After moving to Molde in 1937, Schwitters built up his own Merzbau cottage in which walls and ceilings were filled with collages and large parts of the main room were designed with sculptures of wood and plaster. The remnants of the cottage have been moved into the exhibition. Art writer Arve Rød complained in Dagbladet about how little information on Schwitters there is on the museums website, and claims that the exhibition is only small, pitiful remnants. He believes it does not reflect the groundbreaking art that Schwitters created.

In response, museum director Jarle Sanden pointed out in Romsdals Budstikke the posters and information on the walls, an 80-page binder detailing the relocation process of the cabin to the museum, and a short film that summarizes all of this information. Regarding the comment about the «pitiful remnants», Jarle Sanden responded «yes, but they are very interesting remains.»

«The exhibitions will be changed in April, June, October and December. Photography, architecture, and different topics will be adopted as exhibition themes that will continue to attract students. For international students, I would think the exhibitions about local history and society and the Schwitters exhibition are the highlights. The text is in English and Norwegian, and they are visual exhibitions,» Sanden told Panorama.

A visit to the exhibition costs 70 kroner, which is reasonably inexpensive. However, the museum souvenirs are very expensive; a t-shirt will cost almost 400 kroner, and there is only one option for style and color. Also, the downstairs cafeteria has poor menu options at equally expensive prices.

Still, the museum has had 9.300 visits in the few weeks since opening. This location should definitely be kept in mind for anyone searching a local cultural experience.