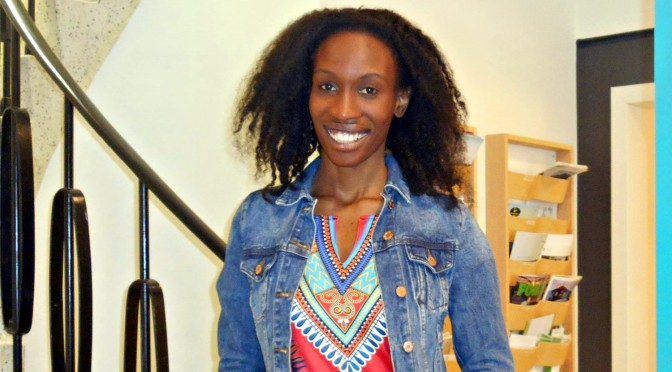 Life is not easy and cowards just give up. In contrast, the brave ones keep fighting with faith and optimism. Monica Akech (30) from Uganda, a master student in Event Management, is such a brave girl.

By AMBER HUANG (text and photo)

«My first decent job was at Trans World Radio back in 2006, after completing my A Level high school course, and before enrolling for a Bachelors program at Cavendish University. I had an idea of establishing a magazine for the youth and had no clue who to approach or how to go about it. As a result, I always travelled with a bag full of printed articles that were written months in advance, hoping to meet someone who would invest time in my ideas. One sunny day I spotted a gate belonging to the mentioned radio station, and asked to speak to the manager, who kept me waiting for close to five hours. To cut the long story short, the long wait paid off, my ideas were considered brilliant for a radio show as opposed to print, and as they say, the rest is history. »

«I later branched into television, as a reporter and panelist coordinator for a program called Africa Rising on DSTV. Then I pursued a bachelor degree in Public Relations and Media Management. At the university I became the editor-in-chief for the publication called Giraffe after a highly politicized campaign where I beat other contestants ahead of me during my first year, first semester. That surprised many, since the previous editors had studied at the university for at least a year. As fate would have it, other working opportunities came along with the United Nations Association of Uganda, United Nations Youth Association Network, experience based interactions with the Foreign Affairs Ministry of Uganda, United States Commission for Refugees, among many others, for which I am grateful. The United Nations experiences were the best. I represented my country at global platforms, travelled a lot, learnt to understand different cultures and appreciate differences in people.»

Fitting in the Norwegian society

«Having lived and worked in different multinational settings, the Norwegian society was the easiest to fit into. Norwegians are kind, friendly and calm people. When it came to language, the saying, when in Norway, do as the Norwegians – while maintaining and respecting the values of their society – made perfect sense. Speaking English of course made it easier to communicate, but there is something special about speaking norsk to Norwegians. However incorrect it sounded, they always encouraged me to keep trying and it became more interesting for each passing day. I have yet to differentiate æ ø å from a e u o.»

«Working for Panorama as a student reporter enabled my interactions in Norway to become much easier. I would recommend new students to try it out. It was an eye-opener to the social life which I was mostly interested in, given that they were fun assignments like parties, events and trips. Under the guidance of the editor Arild Waagbø, I took all assignments seriously. And especially the ones that did not involve interviewing students or professors, but locals from Molde and other regions, while carefully listening to feedback.  The epitome of working for Panorama was an assignment to cover English rockstar Bruce Dickinson who had arrived in Molde for a business event. Other press and journalists were present, but none was allowed to take pictures or interview him. The Panorama crew happened to sit right behind him, we could hear his heart beat. As soon as he stood up and was about to leave, I hesitantly asked if he could take pictures with our team, which he agreed to. Standing next to him for a photoshoot had me so starstruck that I forgot to ask any sensible questions. We were so excited that by the time we checked the photos on a laptop, one of the golden photos turned out to be not so perfect. But we were elated to have had the chance to come so close to him.  At the end of the day Panorama was the first media in Molde to break the news about his morning visit to the highschool. »

«Interviewing the rector for the first time was a little bit nerve wrecking. I did not know what to expect, but he turned out to be one of the best interviewees and I always looked forward to interviewing him. Norwegian names were quite difficult to spell in the beginning, especially during social events. Some would either give fake names intentionally, when drunk or over excited, others would say funny stuff to be quoted and wait for the article to be published and then laugh about it among their circles. Getting free passes to all the cool events in and out of campus, and meeting different students from different courses, was also a nice exposure. Beating deadlines while writing course works – or not having an article published-  was also a fear, but gratefully that hardly happened. Sometimes some students would feel left out if an article about their activity was not included in the news and diplomacy had to intervene. In brief, Panorama was – and is still – such a nice experience full of good memories. »

«Problems will always be part of human life. We are either heading into a problem, in a problem or getting out of it. Something we do not plan for is going to hit everyone hard at one point in time, whether strong, fast, wise or swift. One has to learn to respond positively and view it as a phase in life and if you do not, whatever skills you have will not work to your advantage. Things you wish never happened happen, and that is life. A strong network of friends, family – and for the ones grounded in Christian faith like me, prayers and hoping for a better outcome – made and still make me strong on a daily basis.»

Motivation to set up a company

«Studying for a Master degree in Events Management in Molde opened a can of creative worms. I made it a point to try and apply every lesson in the real world and many a times I would be day dreaming, envisioning many things while the professor lectured. It so happened that the dreams suddenly begun materializing when I put pen to the paper and begun drafting a business plan. I remember the first event I tried was at the campus canteen: the viewing of the Africa cup of nations with the help of fellow students and other student bodies. Afterwards, more opportunities presented themselves and I founded Afrost Events. From an early age, I cherished the idea of being my own boss, the only difference was that I wanted to set up a media company that magnified a positive image of Africa as opposed to managing events, but so far so good, and there is still time for more business ventures. I am happy with what I am doing while learning from successful entrepreneurs, particularly the daring Richard Branson, who is the founder of the Virgin Group.»

«The biggest challenge of event management is that you are as relevant as your past event. It is always changing, always elevating. You have to be born into this business. If you are not continuously putting up good results, your career is done. Another thing is that there is a lot of repetitive work and the hours are not from nine to three, but can extend to unimaginable hours which may have its effects on social life. You have to live it, eat it, and breathe it. The best thing about this profession is that every client is different and this requires the eye for connecting dots and brands to potential clients, which makes it more interesting – especially when the tiny bell is always ringing in the mind with new concepts.»