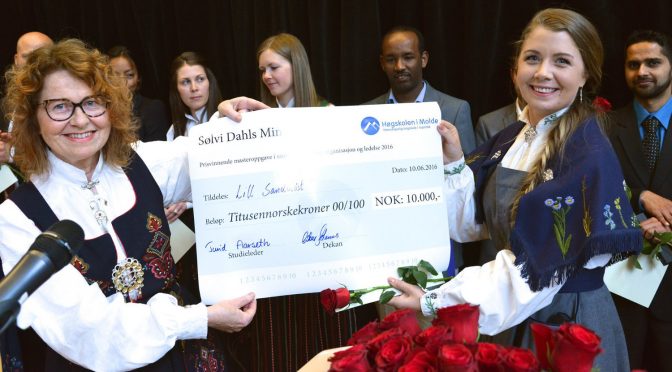 Sølvi Dahl was a beloved faculty staff member who tragically fell to her death from a mountaintop when posing for a photo.

She was an acknowledged academic with a devotion for employment and gender issues, and was posthumously awarded with the Møre and Romsdal gender equality prize in 1999. To honor her academic achievements, Molde University College and private contributors established an academic memorial award in her name and spirit.

Lill Sandblåst is a part of the master program on change, organization and management (SOL), and she was considered a deserving awardee with her master thesis «Bypakke Molde – holdninger og effekter» on city transport planning. Turid Aarseth, who represented the jury, said that this thesis captured the spirit of Sølvi Dahl with high academic standards, well structured work-flow and open access to her thesis.

The award-winning thesis deals with the effects and public opinions on transport planning regulations in Molde that was enacted in 2015. They will have big impact on the city with investments in the order of NOK 2,6 billion. The regulations have been political controversial due to four lane roads and the fact that the construction mainly will be financed through toll charge.

This sparked the establishment of a special interest party, Borgerlisten, that won several delegates in the local elections last year. Lill Sandblåst analyzed the effects of travel behavior and the public opinions towards the regulations and if they differ depending on geographic area, gender, income, car ownership and number of children.