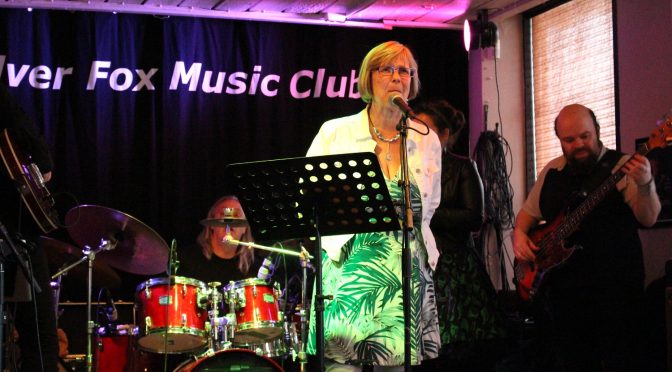 A concert at the Silver fox being announced. Photo: Krystof Diatka

Another establishment placed on the Molde’s seaside is the Dock Side which is not just what it seems like at first sight.

This venue offers a brown pub atmosphere with a selection of beers, both on tap and bottled, and other regular drinks one would expect in a place like that. This pub is mostly enjoyed by the locals and is usually not the first choice of the student community.

Nevertheless, unlike any other establishment in Molde the Dockside offers an outdoor area on a pier overlapping into the fjord placed right in front of the Dockside. This part has its own bar and provides extended enjoyment of the Molde’s main merit- the breathtaking view. Which is, especially during this long streak of good weather, very pleasant.

However, the Dockside is not just a place where one could enjoy a quiet drink. Every now and then in turns into the Silver Fox music club which offers concerts of artists of different genres and styles. Starting in 2004 it has been organizing one event every odd week.

The concept is similar to the increasingly popular international Sofar Sounds events recently starting taking place in Molde as well.  Not so famous artists playing in an intimate atmosphere with no entry fees but potential voluntary donations. Unlike at Sofar Sounds events at Silver Fox, one could purchase alcoholic beverages which make the events that much more exciting.

The fixed event days with Silver Fox are Thursdays which cover the gap between the Wednesday quiz  nights and Friday nights when almost nothing usually happens in Molde. So even though the music might not be of the highest quality it is definitely worth a shot for people who like to socialize on Thursday nights. The first part of the event is always dedicated to a concert of the featured performer while the other part brings a jam of local artists.

On Thursday the 9. of June a concert of a local band Passim was presented in the Silver Fox. This musical body plays jazz. The performance of the vocalist Guro Hoem was especially remarkable.