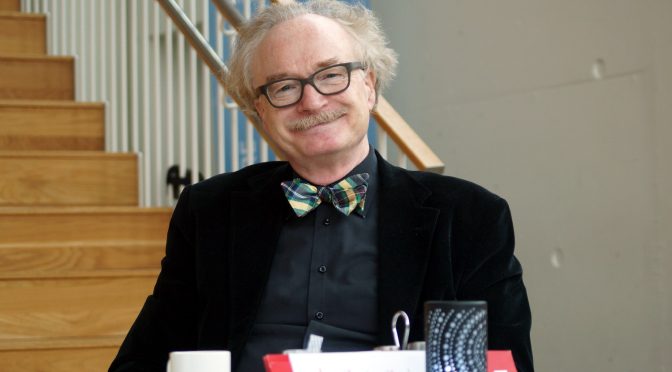 How you deal with your problems determines your success.

This is a lesson that I learn from the life of Norwegian poet Knut Ødegård (70) during our interview at Plassen in Molde city center. Knut Ødegård is internationally renowned for his works of poetry, novels, books, plays, and reinterpretations. He lives in Molde and is the founder of both the Bjørnson Festival and the Norwegian Academy of Literature and Freedom of Expression. Last year, the academy – also known as the Bjørnson Academy – awarded the Bjørnson Prize to whistleblower Edward Snowden.

– Can you recap your career journey?

– I started as a very young man, and I wrote my first book of poetry before becoming 22 years of age. I was a typical modernist. A need to express myself, feelings, personal thoughts, the world, what the future will bring and a lot of questions I had concerning being a human being and a young man were my inspiration to write. I was influenced by the modernistic poetry I read, both Norwegian and also from abroad: English, German and French poetry works. I was quite famous as a modernistic poet in the 1960’s and 70’s.

But in the 1980’s, my youngest daughter became very ill with schizophrenia. That changed my poetry. Since that moment, my aesthetics was not the important thing anymore, so I started using the poetry to tell about real life suffering and sickness. It made me solidary with all suppressed people around the world. That also started my engagement with the establishment of the Bjørnson Festival, an international literary festival held annually as a reminder of the international struggle for freedom, peace and human dignity.

It didn’t stop there. I started a journey deeper into the religion. Like most Norwegians, I was born as a Lutheran Christian, and my religious investigation finally made me a converted Roman Catholic, where I currently belong. Moving through the holy mass, it was as if I could bring with me all my life. The poetry book which is a clearest expression of this defining turning point is Missa, a Latin word meaning the holy mass. Missa is a work of poetry discussing with God. Asking God whether it is possible to come with all these burdens to the holy mass and putting my own life into it.

When my daughter heard these very dirty voices speaking to her, trying to destroy her self-opinion, she told me exactly what the voice was saying. I wrote it down and it became part of the work. It was like hunting these voices and silencing them. The mass – the sermon of God – and my own sermon together created a dialogue between the divine and me. It was a question of rising up and using my bad experiences for the good.

I was an infant weeping

in the cellar: of ashes and smoke,

in the dark, something

is moving there. There are shadows

and the acrid stink, something drips

and drips and no one hears

a child in a caved-in cellar

by the sea, lost

until I called Mummy´s name and she

found me and lifted me up to her big

white spume of the raging sea in his hair. He carried me

home with his right hand, close against his heart, with his left

he carried a handful of fish. I can still feel

the warmth of his big body, and his voice

– Two of your novels are written for young adults. What inspired you to target young adults?

– The answer is quite simple. I wrote them for my own two daughters. In the historical novels, I wrote one chapter a day, which I read for them before bedtime. The novels are a compilation of the stories that I read to my daughters every night.

– Voluspå and Håvamål are two of your poetic translations and reinterpretations. What kind of works are they?

– In fact there are four big volumes I have made with this old Edda poetry, more than 1500 pages. Voluspå is just one of the poems in the first volume. This poem is maybe the most interesting example of the ways of thinking in the Viking Age: about how the world was created, who were the gods, how will the world end and the possibility for a new world. Voluspå means the prophecy of the volve, a woman who could see everything from the beginning of the world to the end of the world. She is the magical seer, like a prophet. That is just one small part of the big work. There are two main groups of these Edda poems. The first group is the religious poetry, and the second group is poetry inspired by stories about heroes who were historical persons living in the fourth to sixth century AD. We know about them from historical sources in Latin, many of them living in central and eastern part of Europe towards Asia. It is a work of echoes from the oldest historical times, which was retold for generations until it finally was written down in the 12th century in Iceland. With the emergence of Christianity came the Latin alphabet and also the art of making manuscripts out of carved skins. They started writing in Old Norse what had been oral traditions for centuries. I have been using old manuscripts that is kept in a museum in Iceland for my work.

In Voluspå, in the beginning after the world was created, the gods were playing with gold. They had peace and harmony until greed suddenly arrived. Greed created murders, murders created wars and wars created refugees. The volve is warning us to take care not to be greedy. While translating Voluspå, I was thinking that another word for gold of our time is oil and gas. Triggered by greed, it is oil today becoming the reason for many of the murders, wars, chaos around the world as people greedily fight wanting to have the power over the resources.

Håvamål has two main parts. First, it speaks of how to behave, being a gentle man, and taking care of what you shall say. In the second part, the god Odin is hanging on a tree. He is in a stage between life and death where he can get all secrets.

I would say that Voluspå is the main understanding of how the world was created and how it will go, whereas Håvamål is about how we should live together. It took me six years to finish the whole work and I had these two poems in my first volume. There are three more volumes, the last one I published this year.

– You are born in Molde, but two of your books are about Iceland. What made you become so interested in Iceland?

– My interest and tie with Iceland started at a school, and I married an Icelandic woman. When I was at school, I had a teacher who used to tell me how great the literature of Iceland is. I started reading about the history and the Icelandic sagas then. Later, I became interested in the language. In 1971, I was the member of the board of the Norwegian society of writers as a very young poet. As part of that, I was sent over to Iceland for a Nordic writers meeting where I met good friends and Icelandic writers. That boosted my link with Iceland and since then I went every year to see my friends in Iceland. Finally, I married an Icelandic woman, who is a choral conductor.

– How do you spend your free time?

– What is your best childhood memory?

– I was very happy with my family. I lived in a very harmonic family and we were just between the city and a farm land. We had a little farm, cows, huts, and things like that. I remember walking down to the school from the farmer’s life every day. I was very happy sitting with my mother while she was milking the cows and singing for me old songs and I was sitting on a little chair with a blue cap and singing with her, and the stars twinkling over us. This is in my memory like a heavenly picture.

– If you were the prime minister, what is the first thing you would do?

– I really do not know the answer. Personally, I think it is a very dangerous situation with the climate currently. Catastrophes are coming closer and closer. We must do something radical and not think about just how we can earn much money, but also should worry for the future of life. Norway is not isolated from the rest of the world. We are responsible for the whole world. We are brothers and sisters whether we are in Africa or Europe or America.

– What feels like love to you? As a poet, how do you explain it?

– That is what every poet is trying to express. I think there are two or three forms of love: Divine love between God and human beings, general love between friends and family, and the third one between man and woman, which affects the sexuality.

– If you had a chance for a «do-over» in life, what would you do differently?

– [Laughs] Most things. Well, what I have been thinking about is that I misused so many of my years when I was young. I did not study enough, I did not use my time well enough, I thought that I would live forever, and I did not understand that we have these few years here on the earth. If I could become a young man again, knowing what I know as an old man today, then I would absolutely have been a much better student.

– What are your favorite books and authors?

– There are so many. Among poets, I would mention the Syrian poet Adonis. I like his poems very much. I would also like to mention Norwegian poet Rolf Jacobsen, who was an extra father for me. He took care of me. He inspired me, saw that I had talent and invited me to stay in his house for periods.

– What plans do you have for the future?

– Now, I have just finished these six years with the Edda poems. So now I am working mainly with my own poems. I have been working for several years with a novel I never finished. I think now is the time to finish that too, a novel which is a mixture of my biography and fiction.