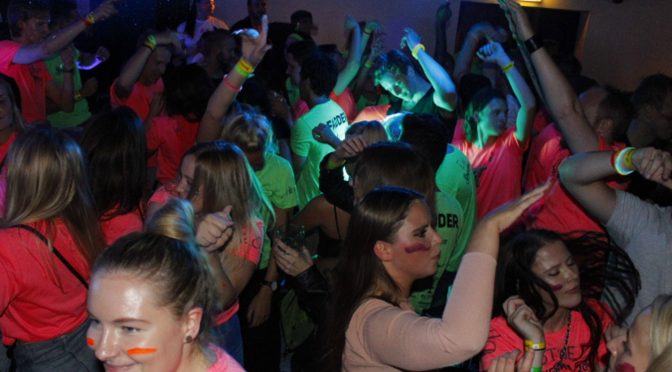 HiMolde students are on the floor. Photo: Nancy Le

After some move-in chaos, hundreds of HiMolde freshmen in neon shirts stepped into weeklong events started by the kick-off party at Kompagniet Thursday night.

New students showed up their excitement from the beginning moment on the bus and exploded when they are on the floor. Armed with neon shirts and smiles, hundreds of HiMolde students showed up to Kompagniet early to celebrate a new academic year at HiMolde.

The neon colour was everywhere. Not only on T-shirts, but also from hair accessories and drawings on the face and even the belly. It made the partying atmosphere better than ever. The highlight on the waiting queue this year was a photo booth set up by the Opening Week organising team. Kompagniet furthermore employed a freelancer to take pictures for students. Under the continuing flash from two cameras, some shouted that they were like stars. A bonus point for the organisers of this event.

The burning performance DJ & Drums was the headline of the kick-off party. The drums beat was astounding and heated up the floor. The hotness of the concert was not only in a figurative sense, but also literally. The partygoers got wet and had to use the terrace to enjoy some fresh air.

The party also had the presence of second-year master students who are not «fadder» and not «barn» anymore. They came to the party because they knew the kick- off party is often the most fun evening of the year.

(Editor’s note: Nancy Le is an Opening Week board member, but was not directly involved in organising the kick-off party at Kompagniet.)