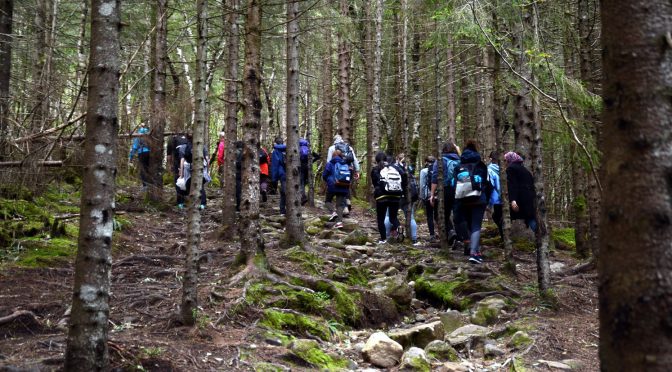 Students on the path towards Trollkyrkja, limestone caves carved out by water. Photo: Andreas Hustad

Adventurous students from HiMolde visited Trollkyrkja (Troll Church) caves on Wednesday, with the lead and organization of Eva-Merete Otterlei Børstad, the student counsellor of the university.

Trollkyrkja is not a religious facility, (even though the name might suggest it), but a rare natural formation. The main cave is more than 70 m long, and after a both refreshing and exhausting hike above 470 meter of the sea level, the reward can be found inside: a waterfall inside the cave falling into a marble bowl.

Due to its fame, it’s not a surprise, that more than 30 (both Norwegian and international) students gathered together to reach the main destination, and gain some life-long experiences during the trip. I asked the organizer Eva-Merete to tell a little bit about these trips:

How long have you been organizing these student trips?

«I started in 2012 and from then I had one hike in the autumn, and one in the spring semester, so everyone who is here for at least one semester can join one trip. In the beginning the idea was that if I arrange hiking trips, people who join the trips could find each other as people who are interested in such an activity. So if some of them had a car for example, and others knew other hiking trips they wanted to go to, they could do what they like to do together. The main goal is not only to show you these sights, but it is to do something you like and have fun.»

For the question why these hiking destinations tend to use «Troll» in their names around here, she told me, that according to local tales, the trolls turn into stone, when they are exposed to sunshine. It seems that there were many trolls in this area, because there are plenty of them a hiker could visit.

If you like a challenge, you could try to «collect» these huge «trolls» beside the small monsters in the recently hyped app called Pokemon Go. You will have plenty of chances to do that, or join other trips like the one in April which is the next «Studentfjelltur» in line. Those who had the privilege to visit the Trollkyrkja-caves this week, and enjoyed the whole trip regardless of how tiring it could have been, will definitely want to join next time as well.