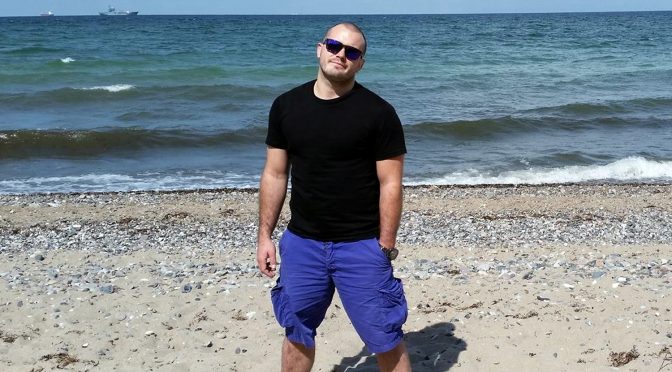 No more exams ... Krystof spent time in Spain summer after getting his event management master's degree in Molde. Photo: Private

PRAGUE (Panorama): Kryštof Diatka, a veteran Panorama reporter and photographer, is back in Prague after getting his master’s degree in event managament.

I am meeting Kryštof in the hotel reception. Being around eight minutes late I am stressed but I have already texted him twice about my delay.

Naïve as I was, believing this Czech man would not have adapted this Norwegian manner during his four years in Molde and Volda. However, he is punctual but far from upset about my delay. He greets me in a cool «bromance» kind of way, as if we have known each other since we were kids. I am soon to find out this man have many good experiences and memories from his time in Norway.

In flawless Norwegian, he suggest we should head out in Prague for a good Czech beer at a local restaurant. As we enter the bar, Kryštof points towards some big brewing tanks in brass.

«This is a good indicator if the beer will be to our delight.»

Apart from what he learned studying two years in Volda and two years in Molde, he also became an adult. Before moving to Norway, he had only been away from his parents during two summers.

«My mom were not there. I had to deal with my own shit, like organize, go grocery shopping and even take care of the laundry.»

He first moved to Volda at the age of 21 to finish his bachelor in media and journalism. There he meet a sleepy town that came alive through the students. Students organize everything in Volda. Kryštof describes the atmosphere as relaxed, playful, and full of room for ideas.

After finishing the bachelor, he came to a turning point; he could either try the low paid and over filled media industry, or fulfill his dream of earning a master’s degree. The choice did not come easy. He had always hated school, but was inspired by his father who became a successful entrepreneur after the Velvet Revolution in the Czech Republic. Kryštof made the choice to start walking the path towards becoming his own boss.

«If I could do half of what he has accomplished – I would be proud.»

In addition, Kryštof has always admired his father for creating something with his bare hands.  When asked to describe himself, he is seeing a restless soul. That is why becoming an entrepreneur suits him, he says. He speaks about learning new difficult things for the first time, like riding a snowboard. Now, when he knows how to do it, it is not as fun anymore. This, and the fact that he could see an end of the 18 years schooling tunnel, motivated him through his two years on the event management master’s program in Molde.

«No more exams – so liberating!»

When looking back at the bright side of the study period in Molde, there are a few things in particular crossing Kryštof’s mind. Like the student life at campus with the parties, friends and just being able to ride the bicycle into downtown in no time.

When the University College got some guest lecturers with «real life experience», he always listened very closely. This was what he found most interesting about the education.

He also learned to comprehend and interact with other cultures thanks to the diversity of different nations in the class. Kryštof believes this is because of the positive attitude towards foreigners one encounters in Norway. Quite the opposite to his home country.

One thing he will definitely not miss about Molde is the nightlife. In three seconds he has mentioned the four possible places to visit a Friday night, Rød Bare Blå, Kompagniet, Tapp & Kork and if one is desperate, Brygga (former name Tangenten). Prague is quite different – with a population 70 times bigger than Molde.

This summer Kryštof has been visiting many music festivals in the Czech Republic, and recently arrived back from a long vacation in Spain. He needed to charge his batteries after 18 years in the school system. While he were on vacation, he has been sleeping in a regular bed. He has never really understood why Norwegians preferred sleeping in a tent compared to a warm and cozy bed.

He just moved into a flat of his own in Prague, but he is not afraid of moving abroad if necessary.

«I will go wherever life takes me.»

The former Molde student has a lot going on right now, and the most important thing for Kryštof is to be able to reflect himself on what he does.

His worst nightmare is to move papers. That really kills motivation, he says, sipping his beer and looking dreamingly towards the sunlight in the windows.