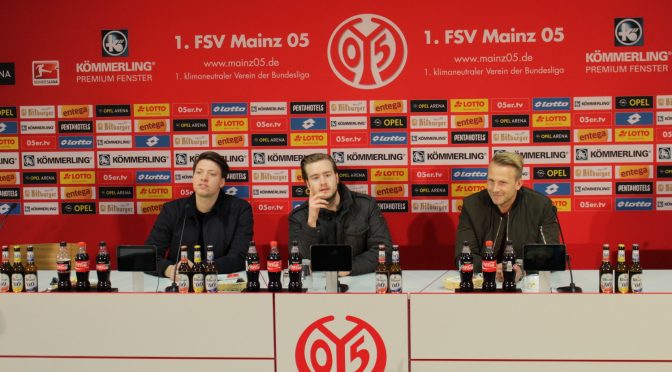 MAINZ/FRANKFURT (Panorama): In cooperation with Johannes Gutenberg University of Mainz, 16 students of HiMolde’s Sport Management master’s program spent eight days in Germany and Austria in order to get practical insights into the event management business in sports.

Molde Airport Årø, 6:45 on a Thursday morning: 16 Sport Management master students enter the airplane to set forth on a trip to Mainz/Germany. Nervy? Curious? Uncertain about what to expect? A little bit of everything, probably.

Seven hours, two flights and one train ride later, all this turned into great excitement when we met the students from Johannes Gutenberg University of Mainz who accompanied us on that field trip, and got the final program. Lectures from academics such as Prof. Dr. Holger Preuss and Gerald Fritz from Johannes Gutenberg University, and presentations from practitioners from the event management business mixed up with visits of great venues such as Allianz Arena in Munich (home of FC Bayern Munich) and Bergisel ski jumping hill in Innsbruck/Austria, were up on the agenda for the coming eight days.

After a smooth introductory day in the city of Mainz, day two kick-started with a lecture about the bidding process for Olympic Games held by Prof. Dr. Preuss, who is a real expert in that area. The afternoon program was under the banner of “security and venues”, and so we visited the OPEL Arena where the local football club Mainz 05 stages its home matches. During the guided tour through the stadium, we did not only explore the obvious parts of it like the grand stand and the field, but also the luxurious VIP lounges and the most sacred room, the locker room of the players.

Some of us even took the chance to have a seat at the podium where usually the coaches and managers hold their press conferences. This interesting visit was completed by a presentation about the security measures that the club has to take around the matches.

Since this day was one of the rare where we really had some spare time, we spent the evening in the city center of Mainz. Compared to Molde, this 200.000 inhabitant city is a real metropolis; thus, some of us first had to get used again to the real city life with endless blocks of houses and crowded streets

On day three, the program took us into the countries that will host two of the major sport events in the coming years. First Toshiyuki Okeya, who is a project manager at Japan Sports Council and therefore currently working with the 2020 Olympic Summer Games in Tokyo, gave us some insights into Japan’s sport organizations and how his home country has been preparing for the Games for the last years.

Later in the day, we continued our imaginary journey to Qatar, the quite controversial host of the 2022 FIFA World Cup. Christian Alfs, a former student at Johannes Gutenberg University who was highly involved into Qatar’s bid for the football World Cup, shared his experience of working in that country; one funny anecdote capped the other.

These two lectures provided us with real first-hand information about what is going on within such organizing committees – and it might be true that, according to Okeya, their members do mainly one thing: “Just talking.”

To round out the day, we jumped on the train to Frankfurt to visit the football stadium there, that sits more than 50.000 people and is the home of Eintracht Frankfurt. Additionally, it has also regularly been hosting big concerts of superstars like the Rolling Stones. Thus, one focus of our guided tour was how to manage such a multi-purpose arena. Just like on the day before in the OPEL Arena, we also got the chance to explore parts that one usually cannot approach. Here the highlight was for most was the breath-taking view from the very top of the stadium to the skyline of Frankfurt.

And that city is a real urban jungle, as some of us experienced in a free evening.

Editor’s note: Part 2 and 3 will be published Monday and Tuesday.