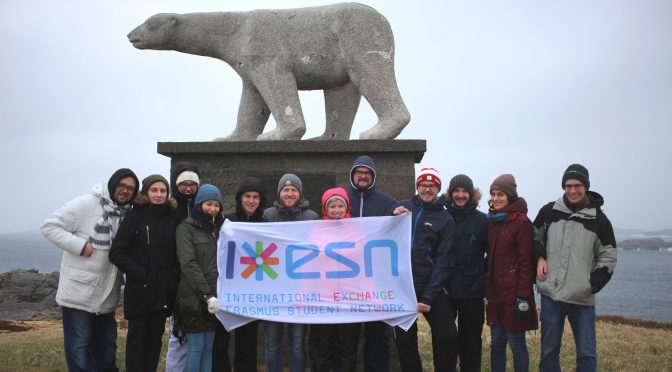 Students with the ESN banner in front of the polar bear statue on Bjørnsund. Photo: Ádám Franczia

The last weekend of March, ESN Molde organized an excursion to Bjørnsund, a group of islands west of the village of Bud. This allowed participating students to learn more about the history and life of a Nordic island, having first-hand experiences of daily activities there, such as fishing and crabbing.

Bjørnsund used to be home to between five and six hundred residents. The islands were abandoned in 1971 as the result of a rather controversial decision by the municipality to avoid costly installations of running water and electricity. Nowadays, however, the islands have become popular holiday destinations, elevating the value of real estate to its peak.

Twelve students who travelled to Bjørnsund learned about all of this and more from a knowledgeable tour guide, who also taught practical survival skills for such an environment. They learned to row, fish with a net, catch crabs and prepare their catch for eating as delicious seafood.

On Saturday, the group headed for the local school. Not only does the school provide living quarters for its students with a common kitchen and living room, it also hosts a volleyball court set in the wind and rain that provided a backdrop for the authentic Nordic island experience. After playing some volleyball in the elements, the island exploration got underway.

The students moved up to see Bjørnsund’s iconic polar bear statue, and then down to the shore where they went rowing in the sea to set up crab traps and fishing nets. It was all teamwork; the different tasks were distributed among the adventurers. Some tried to fish with fishing rods in the evening as well, although unfortunately without much luck. The night ended with board games and card games, and conversation over dinner. Everyone was heartily fed during the trip, which provided more than enough energy to sustain the crab hunt.

On the final day of the excursion, it was time for the explorers to gather what they had caught during the night. Although the number of fish caught was quite meagre (only one), this provided enough meat for everyone to enjoy over lunch. Meanwhile, each crab pot successfully collected some crabs so that the participants could cook them in boiling water, and then, doing as they were trained, break their shells and eat the edible parts of the shellfish. It was more challenging than one might think, but they returned home ready to share their newfound crab eating skills.

For some, the trip concluded with a short hike to the lighthouse which provided an impressive panorama. After a well-deserved lunch, it was time to say goodbye to Bjørnsund, take the boat back to the mainland, and drive back to Molde. Even though the gods of weather were not in good favour that weekend, it was still a nice and memorable experience for all. The students learned about Nordic life and a new island region of Norway.