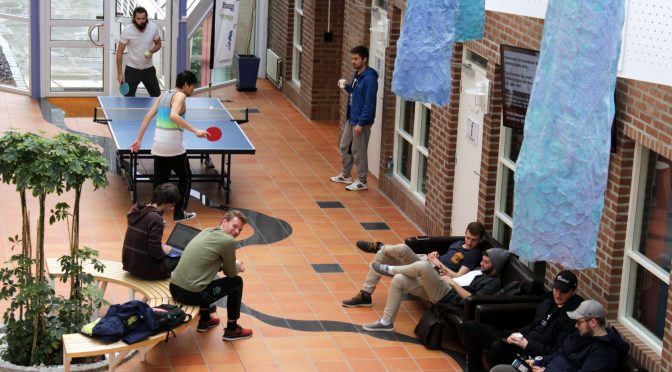 After the group stage on Tuesday, the ping-pong tournament continued with the semifinals, where the respective two best players from each group competed against each other in a best-of-5 game. The first semi-final was played between Derrick Antwi, who reached the semi-final undefeated, and Roman Mukhamedzhanov. Derrick thereby met his favorite’s role and won with 6:11, 11:8, 13:11 and 11:7.

The second semi-final between Bright Antwi, who won all his previous matches in the tournament, and Vidar Kvilhaugsvik ended with a clear 3-set victory for Bright (11:6, 12:10, 11:5).

The final initially seemed to become a more than tight match between Derrick and Bright, when Derrick won the first set just with 14:12. However, Bright apparently mobilized all his power and managed to turn the match for his benefit. Finally, he won the following three sets with 11:6, 11:6 and 11:5 and took the ping-pong title of Erasmus Games.

At the same time, also the FIFA tournament hit the final stretch. Real Madrid, Manchester City and two teams of Manchester United proceeded from the group stage. In semi-final 1, Markus Ingstad (playing with Manchester City) defeated Robin Wessels (Real Madrid) in a quite levelled match 3:1, scoring the decisive goals in the last moments of the 2×4 minutes session.

The second semifinal between Altug Öztürk and Thomas Mathisen displayed a duel that is just about impossible to happen in a real competition: Manchester United against Manchester United. Nevertheless, the match was not as balanced as expected. Thomas cleared just after the kick-off and landed it with 3:1.

The final was thus a pure Manchester derby between City and United. Markus made his team Manchester City score two goals in the first minutes and fixated the win with a third one in the second half. Thomas at least scored the consolation goal to the final 1:3.

Together with the winners of Forest Orientation, Chess and Football, Markus and Bright will receive the prize for their success in the Award Ceremony this Friday at Smuget. Therefore, ESN invites all students to an entertaining party with free hot dogs and music by DJ Soonix.

The volleyball tournament of the games had to be cancelled due to weather conditions.