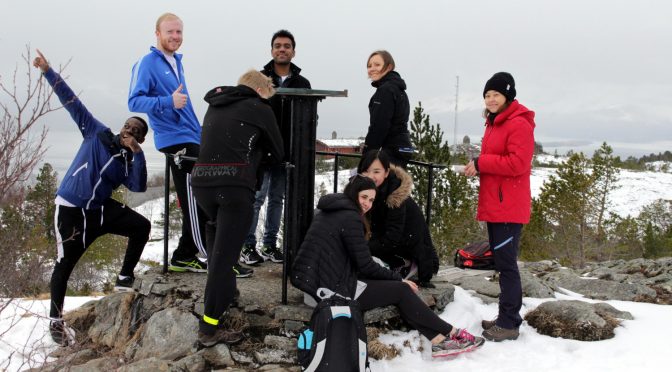 Thursday’s final day of Erasmus Games got kicked-off with an adventurous forest orientation race. This time, also the weather was in favor with the participants.

3, 2, 1 – go! Equipped with not more than a map, three teams (four teams rejected before the start) took the challenge of finding the right way from the university up to Varden.  To make it more exciting, they had to fulfill certain tasks in order to receive a batch with a number on it that was needed to open the lock at the finish.

With an interval of 10 minutes, the teams started at the back of the university, trying to find the checkpoint for the first task. Since the indicator in the map was not that precise, it took some time to find out that it was at the Romsdal’s museum. There, each team had to piece together parts of a picture of the Geiranger Fjord – easily done by all teams, and the running speed of the participants was still quite competitive.

At the start of the Storlia Natursti, the next task demanded logical reasoning in order to solve the mental exercise “river cross puzzle” – also that was no pitfall, but the teams increasingly got closer to each other. Team 3, with Henrik Trondstad and Raymond Dennis III, even caught up with Team 2, consisting of Sienna Li and Amandine Bourgeois.

After the third task next to Storlihytta (painting an intersected circle in a certain manner), Team 3 even passed Team 1 (Tatsiana Pekarskaya and Maxim Gordienok) that initially started 20 minutes ahead of them, and reached the fourth checkpoint as first team.

At that time, the result of the race seemed to be determined since Team 3 overtook all, and Team 2 ran far behind.

However, the last task at the very top of Varden turned out to be the trickiest one: Making fire with just a paper, wood billets and fire steel. Team 3 also managed this task brilliantly, and could open the lock with the numbers gained at the checkpoint 62 Minutes after it had started.

Since Team 1 was struggling with that task, the race for the second place finally became closer than expected when Team 2 caught up again and also started to try to make fire. “I almost had it!” – “Try one more time” – “It was already almost burning!” – The nerves of all participants were really raw when they failed to ignite the paper time and again. Finally, Team 1 succeeded faster BUT: Due to the start interval, Team 2 had the better total time and therefore it reached the second place.