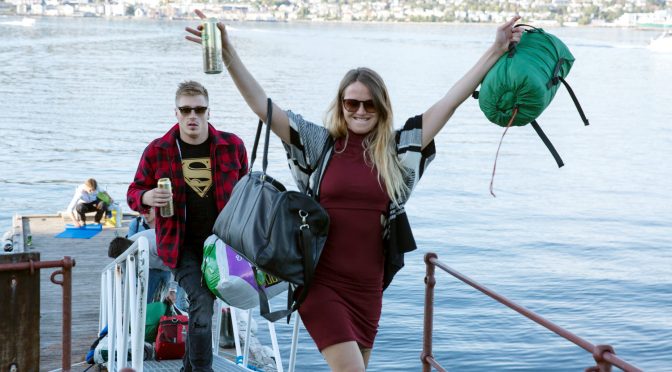 When the summer is ending, we had the privilege to visit and know Hjertøyafestivalen. Or should we call it The Magic Island?

The event is a dream come true for all those responsible for this project. It was almost like a private party for friends and those who really love electronic music. The festival had roughly 300 people attending to it due to the islands’ limits, and those who were there experienced a magical weekend.

Hjertøyafestivalen is an electronic music festival, held in Hjertøya, less than 10 minutes by boat from Molde city centre. The island is also home for a museum with different attractions during the summer, and this year they hosted an event like this for the first time.

Organized by Pål Thomas Høstmælingen, Henrik Sæther, Odd Roger Fremstad and Devi Persaud, the event started on Friday and lasted until Sunday at 14 pm. To get to the island you only had to ask for the boats schedule of departure from Molde city centre, and in order to come back from the island, you simply had to ask for a boat.

See more photos on our Facebook-page.

With volunteers helping in all organization and production, the event had 17 DJs playing in two stages, yoga class, art workshop with graffiti, barbecue area, kiosk selling drinks and foods, different areas to relax, have fun and make up to get into the mood of the festival with vibrant colours and two camping areas.

At night you had the option to stay in the festival camping or go back home. A lot of people got back to city to buy food, water, etc.

Talking with the organizers, I could see that they were very happy about everything that was happening.

Henrik Sæther said: “I have no words to describe it!”

Everybody who was there were having an amazing time. Everybody was happy, smiling, having fun and, of course, dancing! All the volunteers and people who were working always had a smile and were ready to help you.

Great people and atmosphere, and the best of electronic music at Hjertøyafestivalen this weekend. See the Panorama crews video of the event! #BeautifulMolde #Hjertøya #Island #Festival #Electronica

On Friday, the weather was perfect. The sun was shining; a beautiful sunset on one side of the islands and on the other side the moon was rising. After a while in the beginning of the night those who went to the festival on Friday could see the amazing northern lights.

Saturday the weather was a little bit cloudy, with a little bit of rain in the evening to refresh those who were in the dance floor. Later there was a beautiful moon to make the night brighter. Is it magical or not? Where in the world you can have all of these things in just two days?

During Friday afternoon, the police showed up, looked around the festival and left with no issues. Later, on Saturday night, they appeared again around 2 am with dogs looking for drugs. Four people were arrested – and three others were charged – all seven due to possession of and use of illegal drugs. According to the Molde police, the seven persons were carrying small amounts of either cannabis or amphetamine, obviously intended for personal use.

Having been in festivals in Brazil, Holland, UK, Germany and Malta, I believe that this pilot-project – as they called the festival – has everything to become an event in the Molde event calendar. The issues that happened are the same you will find in many different countries. You could see how happy people were there, regardless if they were working or partying, everybody was having a wonderful time!

I believe the city needs this kind of event to bring a new life for the international students who will have a different event to participate in, and will bring more tourist for the city – as it was seen in the event. A lot of people who had never been to Molde came from all different corners of Norway. This event had people coming in from Oslo, Tromsø, Bergen, and Russia, Slovakia, UK and other places around the world.

It’s not only about the music, it’s about the friends you make, the experiences you can have, and how you can enjoy Norway in an unusual way.

Hope we can have it again next year!