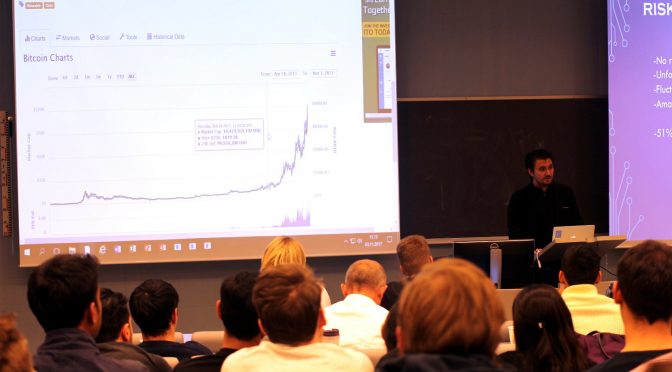 Bitcoin charts like on coinmarketcap.com display the considerable surging of the Bitcoin rate over the last few months. Altug Özturk to the right. Photo: Raphaela Ossberger

Last week, the cryptocurrency Bitcoin cracked its all-time high and for the first time ever exceeded 7,000 US dollars. Start HiM, and Bitcoin trader and student Altug Özturk, took this as opportunity to organize an introduction lecture and give students an insight into the possible currency of tomorrow.

The Bitcoin graph has been displaying mostly one direction over the last few months: upwards. In 2017, it has been rising more than 640 percent. However, people who are not involved in this phenomenon are still skeptical.

Altug Özturk, a Sport Management student at HiMolde, has been trading with bitcoins for almost one year now and he has one explanation for it.

«There is a considerable lack of information right now about it. And that’s why people think bitcoins are used for bad things and that it is the currency of the criminals,» Altug said on last Friday’s Start HiM event.

Reason enough, therefore, to inform the students at HiMolde about this cryptocurrency and the connected blockchain technology. Cryptocurrencies are a digital currencies that use cryptography to secure transactions, and Bitcoin was the first to fully implement this feature, and it is now the most popular cryptocurrency around.

As such, it is only available in digital form and exchange happens via the Internet. To put it simply, you can send digital coins over the Internet. Unlike electronic money and the centralized banking system ruling the financial system at the moment, cryptocurrency is based on decentralization.

This fact that there is no central entity between the traders leads to a high self-responsibility. Once you make a transaction, the money is gone from your account and cannot be retrieved. Also if you make a mistake in the address of the receiver, you cannot make the transaction undone.

All these transactions are recorded on a public ledger served by the blockchain technology. All valid transactions are batched in blocks, and the linked blocks in turn form a chain. This creates a system where it is impossible to undo or change a transaction retroactively without altering subsequent blocks and finally making the system collapse. Consequently, this puts a stop to the infinite juggle of digital assets from one account to another and the problem of double-spending, since each unit of value can be transferred only once between seller and buyer.

For Altug, it is only a matter of time until this kind of digital currency will be accepted: “Currencies have been changing all the time. People started with gold and silver, then changed to coins and further to paper money. Now credit cards tend to take over, almost no one has cash with him anymore, and at some point we will use digital currencies.”

Coming to the crucial question of how to buy bitcoins and where to buy bitcoins, Altug has a simple answer: “Google it! There is tons of information out there, for example as videos on YouTube.”

The necessary first step is to create an account on one of the platforms, for example ‘coinbase’. As soon as the account is verified, you have to transfer money and then can start buying bitcoins. The user’s keys can either be stored on online wallets, on hardware wallets (physical device similar to a USB stick), software wallets (application for smartphone or computer) or as paper wallet (like cheque).

Since there are only very few companies which accept bitcoins as payment method, at the moment it is necessary to change it to US Dollar first in order to actually make use of it in the real economy.

“I used it to pay my rent with it. But I paid lots of transactions fees from bitcoin to US dollars to Norwegian kroner. If my landlord accepted bitcoins, it would be much easier”, Altug said.

Still, he does not believe the ‘bitcoin bubble’ will collapse one day. Also the fact that most of the world’s big banking houses keep an attentive watch on Bitcoin and the blockchain technology is an indicator that there is more behind.

How many people currently trade with bitcoins and other cryptocurrencies is difficult to say, but according to latest statistics, Bitcoin only exhibits a market capitalization of 117 billion US dollars. It is therefore not a surprise that the blockchain technology is among the ten most essential technologies of the current century, together with drones, artificial intelligence and virtual reality.

One thought on “Looking into the blockchained future of money”