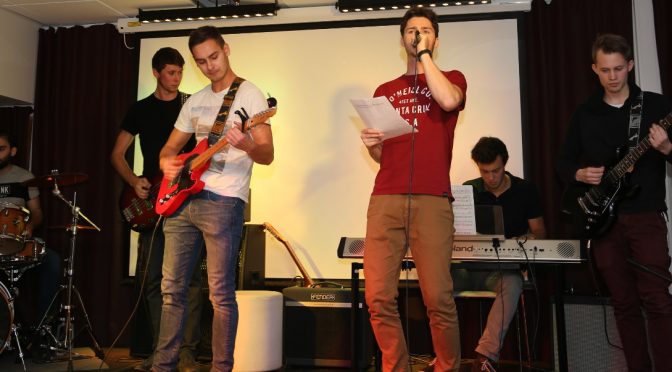 The band called ‘50%’ giving in 100% on their pilot performance. Photo: Ádám Franczia

Adventurous students, who felt open to show their skills to the public could try themselves out last Friday in the course of an Open Mic event at Smuget. Either musical, comic, or other stage-worthy talents were introduced to the rewarding audience.

As on most Fridays, the student canteen has turned into ‘Smuget’, a platform for festivities for students. It happened yet again, but this time, the content was rather provided by volunteering student-performers, who could sign up and deliver their own show for the crowd. All the necessary equipment and assistance were provided by the organizers to create a great atmosphere for everyone at place.

First on the list, the aspiring and recently formed student band, ‘50%’ went on stage, with their pilot performance, a test run before their actual debuting concert on this Friday. Apart from a slight temporary change in the personnel, the whole brand could try itself and the stage out before the main challenge. It was a successful prolusion to say the least, the audience could enjoy a taste of their repertoire including mainly classic old-school rock songs most could relate to. They have a great sound, nice tunes, and proper harmony between the members. All in all, it was a promising start, that has surely generated great expectations towards their first concert.

Lots of student talent on display at the first ever Open Mic event at Smuget.

After that, Ilya Zabrodsky representing Belarus has showed his magic fingers that could operate on the Rubik’s cubes (shout out to Hungarian compatriot inventor, Ernő Rubik) at a crazy speed. Self admittedly Ilya is among the top competitors in the world of Rubik’s cube solving. It was impressive to see how dedication and focus could led to such extra-ordinary achievements in practice.

Thirdly, Shashank Gupta came on stage with a pop(ular) song, to show his courage and determination for providing entertainment. It was a real crowd pleaser performance, everyone was cheering and clapping for him, turning into an applause at the end.

As an intermezzo, Andreas Hustad and Rolf Magnus Orø, who were handling the sound systems, offered a short singing-keyboard duo presenting the ever classic ‘Hit the Road, Jack’. It was a nice and entertaining contribution for the flow of the event.

As the last official performer, Erik Skjørsæther came up with showing off a combination of drums, stand-up comedy and keyboard skills, in that order. Although unfortunately the author of this article could not understand the verbal part of this due to lack of satisfactory Norwegian knowledge, the indigenous audience certainly enjoyed it, and in package it was fun for everyone.

As the official Open Mic performers concluded their parts, there were room for new and recurring entrepreneurs to entertain the people. Thus, some 50% of the ‘50%’ returned for more in the form of a jam session, supplemented with new musicians, Shashank offered another song due to popular demand, and more piano skills were demonstrated by others. Tatsiana Pekarskaya introduced the crowd to some authentic Belarusian folk tunes, which was really interesting and aesthetic at the same time.

As the number of volunteers gradually ran out, the night concluded with usual party music and activities, and a proud feeling, that our uni is actually quite rich in talented and entertaining students.