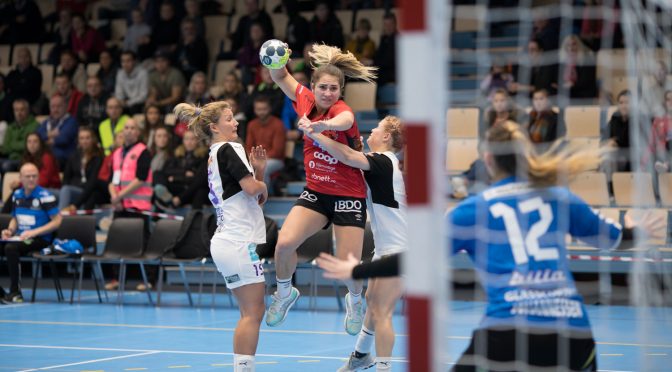 As a self-expressed sports enthusiast, I was extremely excited to not only watch my first handball match, but also to experience live Norwegian sport for the first time.

Upon attending Molde Elite vs. Glassverket in the Eliteserien, it was fascinating to observe the Norwegian sports culture, and to compare this against my experiences of watching live sport in England. To provide context, my experience of watching live sport in England mostly encompasses Premier League football fixtures, and thus being part of crowds of roughly 30,000 people or more.

Firstly, the atmosphere inside the Molde Arena grabbed my attention straight from the start! To expand, the closeness of the fans to the pitch coupled with the ‘echo’ of the indoor arena made for a truly electrifying atmosphere, and thus the fans were truly involved in the game. Even before the match, the lights were shut off and a spotlight was cast to introduce each player, met by enormous cheers from the crowd.

It is possible to suggest that the nature of the game influenced the crowds enthusiasm. The sport itself was played at a very high tempo, and was highly physical. On a small court, each team defended deep which allowed for ‘end-to-end’ attacks and kept the game exciting throughout. In contrast, despite periods of high intensity, English sport can undergo periods of little entertainment as teams attempt to ‘manage’ the game and slow the tempo to their advantage, which can subdue the crowd, however in Handball this was not the case, and the game remained competitive throughout.

A further observation surrounding the match was the high level of sportsmanship displayed throughout. For example, despite high levels of physicality shown by the players, there was no intentional fouling or ‘playacting’ to influence the referees.

This is in strong contrast to professional football in England, where the game is more identifiable with gamesmanship, in which players often dive or commit intentional fouls to gain an unfair advantage. This behaviour was not just limited to the players, but was observed in the crowd, as the home crowd began to clap the opponents in the last minute of the game to encourage them and build some momentum as the result had already been decided.

Having recently learned about Scandinavian sport as part of my master’s degree, one of the key themes of Norwegian sport was the social cohesion created by sport, and its inclusiveness to all. It was very interesting to have observed this in practice in the Molde Arena. Furthermore, each time a goal was scored, the whole bench of the team jumped up to celebrate, which again is unlike common practice in England.

Overall, in an arena small enough to hear the player’s communicate during the game, the atmosphere was electric, and was truly inclusive to everyone there, whether a player, coach, supporter or journalist! It was refreshing to watch competitive sport representative of traditional sporting values and to feel included, opposed to feeling more like a customer back home in England, where ticket prices are simply ridiculous, and fans are very distant from the players and the sport itself.