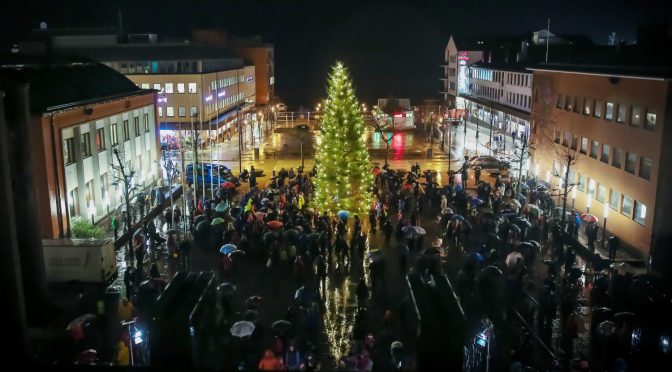 Numerous kids and their parents braved the pouring rain and gathered in front of Molde’s town hall to celebrate the enlightening of the Christmas tree. Photo: Eduardo Perdigão Drapier

Thursday night, two days after the tree was logged in Kvam and afterwards transported all the way to the town hall, it was time to enlighten Molde’s probably biggest Christmas tree. Numerous kids and their parents braved the pouring rain and gathered in front of Molde’s town hall to get in pre-Christmassy mood.

As it has been a long tradition, the enlightening of the Christmas tree in front of Molde’s town hall officially kicks off the Christmas time and has always been a been a must-go for Molde’s young inhabitants and their parents.

After the solemn inauguration of this year’s «Julegrantenning”, as it is called in Norwegian, by Molde’s mayor Torgeir Dahl, he handed over to the young actors performing the tale of “Snekker Andersen”.

“Snekker Andersen” is a traditional Christmas story in Norway and tells about a happening during a Christmas night many, many years ago. In this night, Snekker Andersen, a carpenter with many small kids, dressed up as Santa Claus, took his toboggan and a bag with the Christmas presents for his kids.

However, when he placed his toboggan outside his house, the toboggan – together with Snekker Andersen – slid away on the frozen ground, slipped down the main road and finally collided with another man in a Santa dress – the real Santa Claus.

And of course, Snekker Anderson himself finally enlightened the Christmas tree and made the children’s eyes shine as bright as the lights on the Christmas tree – if not more. Joyfully they then danced hand-in-hand around the glowing tree. Song performances from the Snekker Andersen tale by the music bands of Langmyra school and Kvam/Sellanrå school catered for the harmonious atmosphere on the square.

Of course, the popular Christmas carol “Glade jul”, the Norwegian version of “Silent night”, should not be missing there.

Now it’s time to wait until Santa Claus (or Snekker Andersen?) gets ready his toboggan and spreads joy among Molde’s kids – hopefully without any accident.